Why Q-Games Rocks My Socks 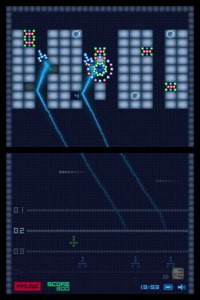 Now, we’re about nine months into the service, and right now Q-Games has it by the balls with three stellar releases in about two months. After Skip's initial run of Art Style games ran out, Q-Games put out the final Art Style game (right now) with Art Style: Digidrive, which is probably the most addictive game I've played in a while. It's a simple premise that involves directing traffic into four different directions, hoping to line up five or more of the same color so you can create fuel that can be ignited to push a ball away from a spike. I realize that's probably jibberish, but just trust me: it's awesome. It gets even crazier once you start lining up combos and multiplying your fuel supply by doing so. I enjoyed the single-player so much that I still haven't even tried the multiplayer. It just hasn't occurred to me because I’m having so much damn fun with the basic mode.

Earlier in January, Trajectile hit DSiWare. It is the first in what seems to be the spirtual successor to Art Style series. It's some weird mixture of Breakout and Peggle. You have three different types of "things" (Trajectiles?) that you can bounce off the walls and fire off at a mess of blocks on the top screen. One type bounces around, one is a bomb, and the other is a drill. Your goal is to hit a few highlighted blocks. There are power-ups you can snag along the way. Did I mention there's something 200 levels? And there's medals to collect? And it's awesome?

Outside of their DSiWare output, I played PixelJunk Eden, which was pretty fantastic. If I ever dove back into my PS3 hardcore, I'd probably pick up PixelJunk Shooter. Is it worth it, dear readers?

Shooter is very, very much worth it.

I have both Digidrive and Trajectile and honestly, neither sucked me in like they did for you.

I liked Digidrive quite a bit, but after playing it for about an hour I haven't had the desire to try it again.  It strikes me as a fun Flash game that you play for 20 minutes and then forget about.

Trajectile was the same--fun at first but it quickly got boring after I saw everything there was to see.  200 levels isn't a selling point if I'm bored with the game after completing 30.  I also thought the controls were pretty bad; it's not uncommon for me to line up my shot perfectly only to pick up the stylus from the touch screen and have nothing happen.  Sometimes I have to line up my shot 3 or 4 times before it finally registers.

I'll be honest, my pace with Trajectile has been slow and plodding. I'm in the third batch of levels after playing it sporadically a level or three at a time since launch. I think if I blew through it, I wouldn't like it as much.

Digidrive just hooked me. I understand why people wouldn't enjoy it, but that game hooked me bad.

I like Trajectile's random mode, that way I can just hit "random" and get some levels served up without needing to bother with the level select or anything.

I like Trajectile's random mode, that way I can just hit "random" and get some levels served up without needing to bother with the level select or anything.

I have enjoyed the game tenfold since I discovered that.