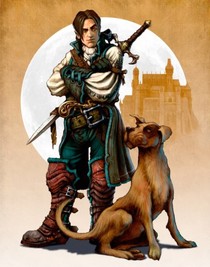 For the first part of the game, it was really good. The combat was simple yet awesome. The glowing breadcrumb trail was a great addition; I could freely wander around and get right back to questing whenever I wanted to. The quests were generally all fun and the marriage and real estate building aspects brought about a lot of hilarity. It felt weird having sex with my neighbor's wife, but I could tell by her girlish giggles that she loved it. Hands down, my favorite aspect of the game was the dog. While the dog is somewhere around 40 years old by the end of the main quest, he was a great asset in treasure hunting and fighting.

After I got all of my Sims-like cravings out of the way, I focused on the main quest. As I fought through the same generic villains over and over again, I became very bored by the combat system. I could still sit down and play the game for two hours at a clip, but the combat system just kind of dragged on over time.

Regardless, Fable II is a great game and many an hour can be spent in its fully realized world. Just don't expect the main quest to give you a great sense of completion. After all, the journey is more important than the destination, or at least it is in Fable II.

It felt weird having sex with my neighbor's wife, but I could tell by her girlish giggles that she loved it.

Being someone not impressed by the first, is there enough difference here to make it worth a purchase?

I enjoyed the first but, like you, was unimpressed. From all the hype and crap I remember hearing before Fable I, Fable II is the game Molyneux originally pimped.
YMMV because I know there are haters on this game, but I'd say play this game at some point whether it be now or in a year or two. It's interesting to say the least.

Being someone not impressed by the first, is there enough difference here to make it worth a purchase?

Hard to say...I personally disliked the first game and stopped early on into it, but loved it this time around...The thing is, you really have to understand that the game is as much sim as it is an adventure game (buying new real estate to earn more money in the long run, etc), and that as an adventure game it has a very simple (yet addictive) action game design...

Just remember not to take the game too seriously, as its obviously still not perfect, but if you enjoy adventure/exploration (and dogs!) then go ahead and give it a shot...

"Just remember not to take the game too seriously"

It's hard not to when the idea/first game was hyped to be something important and incredible, like Azurik and Oddworld and Bloodwake and Fusion Frenzy.

Are you saying that you are weak to hype?  You're supposed to ignore the fantastical whims of Molyneux!  NinGurl more like FAILGurl...

The game is far superior to the first IMO.

Worth skipping the first and going directly to it then?  I've never played the first, but I plan to if I ever join the xbox world... =P  Which could potentially happen this holiday season.

Pale, you do not have to play the first one.
Occasionally in Fable II, they will reference the first one when they talk about the old hero and old times, but its all just little references.

Worth skipping the first and going directly to it then?  I've never played the first, but I plan to if I ever join the xbox world... =P  Which could potentially happen this holiday season.

I would recommend you just go to Fable II. It is a much more complete experience.

I'm looking forward to playing it sometime... after Christmas.

I've been playing it quite a bit. Goofing around and trying to get all the achievements is fun. There's a lot of hilarity in the game, just little things like the item descriptions and all that, they're quite witty.

The fast travel is neat, but there's a problem with not knowing how close areas are relative to each other. If you have to go to a new location for an assassination job or something, you can't fast travel there and it won't tell you what area is closest (like it does for a regular quest). What a pain in the butt!