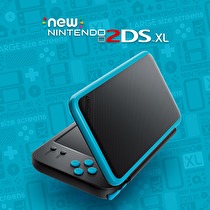 Two different discussions emerged about the 3DS at this past E3. One, from Nintendo, was that the 3DS was a full part of their business for at least the next year, as proven by the Treehouse Live announcements of Metroid: Samus Returns and Mario & Luigi: Superstar Saga + Bowser’s Minions. The other, from a minority of current and former 3DS owners who were all in on Switch, was to wonder why Nintendo wasn’t as well. Despite that, Nintendo stuck to their guns and kept promoting the pending release of the New 2DS XL.

The system’s 2017 lineup is solid. Ever Oasis just launched and is charming everyone in sight. The New 2DS XL may be the platonic ideal of dual-screen gaming. Metroid, Goombas, and Pokémon dominate the fall. That multiplayer Kirby game is still a thing. Third parties are still coming with Culdcept Revolt, “Lady Layton,” Monster Hunter Stories, and Etrian Odyssey V. Even Europe is finally getting Devilish Brain Training. For my money, the 3DS has the second-best lineup in all of video games this year behind the Switch. But that’s this year, which leaves a full year’s gap to fill.

For all I know right now, Nintendo will announce a 3DS Direct Monday and drop a dozen games for 2018. But for right now, we know of exactly three games for North America - Sushi Striker: The Way of Sushido, Radiant Historia Perfect Chronology, and Shin Megami Tensei: Strange Journey Redux. The first of those probably isn’t a retail release, but given how much we love Pocket Card Jockey around here, that’s not a bad sign. And Atlus has a knack for releasing games on systems just before their relevance drops off a cliff, even if the 3DS is getting enhanced versions of DS games still.

But unless you’re the Wii U in 2016, three games do not a year’s lineup make. This is what can reasonably be expected to show up on the 3DS next year:

Fire Emblem Warriors (New 3DS/2DSXL only): The November 17 candidate for Switch was also announced in the Fire Emblem Direct this year as coming to New 3DS, though thus far Nintendo has gone completely silent on this version. The portable-only version wasn’t shown at E3 to our knowledge, and even people who took the preview for us thought it was an exclusive. I wouldn’t be surprised if Warriors was delayed to give the 3DS one last shot of medieval waifu next year while the Switch Fire Emblem RPG gets blown out.

Yo-Kai Watch 3: Another arrow in the 3DS’s quiver for 2017 is Yo-Kai Watch 2: Psychic Specters as announced in the April Nintendo Direct. Yo-Kai is a big deal in Europe so if Nintendo’s been happy with the sales of the Level 5 franchise in North America, the third set coming over is a natural fit. Especially since it’s set in the United States. And if there’s a way to get the third version’s contents into the base games, even better. (Not likely.)

Dragon Quest XI: In fairness, I give this about a 10% chance of happening. Though every numbered Dragon Quest that isn’t a MMORPG has been published outside Japan by Nintendo in this decade, the entire purpose of creating a PlayStation 4 version of DQXI was to take advantage of the worldwide install base for the system. (And to have a version that plays on a high-definition television.) We know it's coming thanks to a Dutch PR firm (Dutch link), but the PS4 version is probably it unless a consistent top 5 on 3DS for Dragon Quest VIII is enough to sway Square-Enix. And don’t even get us started on the state of the Switch version or we’ll be here all day.

Monster Hunter XX: Speaking of games that may get blocked because of the PlayStation 4, there’s Monster Hunter XX. Capcom walked back earlier reports that Monster Hunter XX wasn’t coming west on Switch, stating they are focusing on Monster Hunter World and have nothing to announce at this time (emphasis added). If they’re going to take the plunge on it post-World’s release, the localization should be easy to implement into the 3DS version of Monster Hunter XX... unless Capcom pulled the same stunt they did with EX Troopers a few years back. (According to Capcom community manager Christian Svenson Capcom hardcoded the text in Japanese.)

Wario: With Metroid’s fashionably late arrival on the 3DS this fall, very few franchises that Nintendo owns have yet to hit the system. Trademarks are out there that suggest Nintendo is looking to do something with the one good Virtual Boy game: Wario Land VB. A reimagining of that game, sent to a smaller studio, would give Nintendo a marquee-ish 3DS game to talk about next year. Though if New Super Mario Bros 2 had been a Wario game, it would have been thematically appropriate for the game AND wouldn’t have screwed over the marquee Wii U launch game. So really, we’ll be six years overdue.

Inazuma Eleven OR Nintendo Pocket Football Club: The biggest bribe, er, event in international soccer is next year, and the 3DS got its contractually obligated FIFA games. Europe already received Pocket Football Club and several Inazuma Eleven RPGs ahead of us, but if they can be four and a half years late with Brain Age we can be similarly late with some of their exclusive localizations.

Mother Collection: Hey – it happened on the Game Boy Advance in Japan and well, Star Fox 2 is coming out on the Super NES Classic and and… Forget it. I shouldn’t drink and write.

The 3DS right now is getting a lot of outsourced titles and late localizations because the main teams are all in on the Switch. Even the primary Pokémon team at Game Freak is working on the system. With a few strong games and some hardware cost reductions, the 3DS can sail off into the sunset after one great final Christmas and we can see what else Nintendo has in mind for the dedicated portable market.

The 3DS in 2018 will probably be like the 3DS in 2011 only they have an excuse for not having anything coming out because everything is on the Switch now.

As much as I am ready to move to one portable system and leave the 3DS behind, it is still a great system.  If they ported all the new games coming to 3DS to Switch, it would make a nice transition.

Ooh! In the NWR Discord chat somehow Pokemon Mystery dungeon came up a couple days ago. That seems like a game of the right scope for 2018, and it's Pokémon! Of course, I'm not certain what sort of sales performance its last versions had and if that's the audience fit they're looking for.

I can't even gift the new one to Crimm like I did with Pokémon Super Mystery Dungeon. What's the point.

A Wario Land VB port/remake would be cool as I've never played it.  Though really what I'd like is a Virtual Boy collection with ports of all the first party titles.  I don't think there is enough of a market for a VC but a one-off compilation will probably have some marketability to Nintendo nuts.  Or maybe the sole rationalization is that this is the only other system they've ever released where proper re-releases are even possible.

I don't own a Switch and with the Switch having a lot of Wii U ports I already own and the 3DS continuing to get support I don't feel like I need one yet.  I don't know why Nintendo is doing it this way but it's working out for me alright.

I feel like the next 12-18 months will be a prime time for quality niche titles to shine. A lot of fun and unique things come out in the twilight years of a console, and judging by Nintendo's determination to keep it somewhat relevant there will undoubtedly be a few knock out surprises.

Another Kirby game as he keeps trying to kill the system that just won't stay dead. How many Kirby games is it going to take?!

I feel like the next 12-18 months will be a prime time for quality niche titles to shine. A lot of fun and unique things come out in the twilight years of a console, and judging by Nintendo's determination to keep it somewhat relevant there will undoubtedly be a few knock out surprises.

That's what I'm hoping. Right now we know nothing but I will really enjoy 3DS next year if we see a lot of not-high-budget craziness come to the system, especially if that craziness comes from scrappy newer smaller devs either inside or outside of Nintendo.