When I was a young lad in the late 90s/early 2000s, the Tycoon games were the talk of the house as my sister and I poured hours into the original Roller Coaster Tycoon and Zoo Tycoon specifically. In 2004 I used some of my allowance to pick up Roller Coaster Tycoon 3, this seemed like a no brainer since I loved the first one so much and this one had offered the promise of actually being able to ride my roller coaster creations. In the end this was probably my first experience with feeling let down by a game, as I found the third entry to be far less enjoyable than the first. So imagine my surprise when 16 years later I find out that Roller Coaster Tycoon 3 is heading to Switch, and to be quite honest I’m still not entirely sure why. 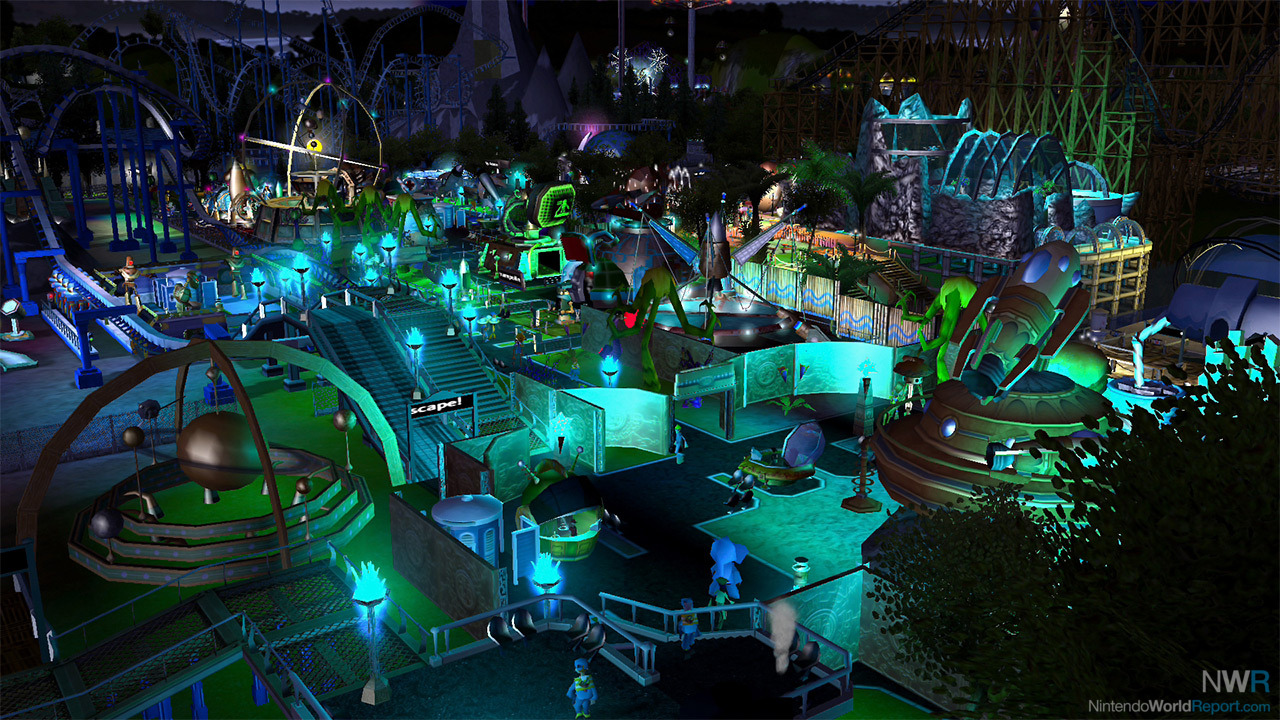 The concept behind Roller Coaster Tycoon is simple: you are in charge of a theme park. This not only includes managing the building of rides but also all of the other park operations that come with it. You have to make sure to put plenty of stalls for people to buy food, drinks, and souvenirs, that there are enough bathrooms and trash cans, ensure the park is adequately staffed - it’s actually a lot of responsibility. As you add attractions to your park more people will begin to attend, earning more money but also causing a spike in the things you have to keep track of. If you don’t stay on top of things you’ll find your profits begin to tank when your rides break down, your paths are covered in trash, and your staff has all quit. The game offers two modes of play, first being a career mode where you’re given an already started park and a set of objectives to meet, and a sandbox mode where you’re basically left to do whatever you want and build your dream park.

Your first question when it comes to this PC game coming to console is probably how gracefully the controls transferred over from mouse and keyboard, and I’m unfortunately here to tell you that they really didn’t. While the controls are usable they’re still incredibly clunky and sometimes straight up unpredictable. The zoom in and out feature that would regularly be the job of a scroll wheel is moved to ZL and ZR, which work fine enough. The right stick controls the camera’s rotation and panning, an act that moves quite slowly except at seemingly random intervals when it flung me at hyper speed across the map. The left stick controls the cursor, which once again moves quite slowly and yet manages to be slightly too sensitive, with the slightest nudge taking you past if you’re trying to select a small object. By far the worst part of the console controls is the radial menus in the lower left and right corners, which can only be controlled by holding down L or R (depending on which corner the one you want to use is in) and rotating the left stick, a process that is far more cumbersome than it sounds.

One of the biggest selling points when this game originally released was the promise that you would be able to ride your rides, which admittedly at the time was a very impressive idea. You can in fact still do that in this rerelease, but you’re probably going to find out very quickly that it’s not nearly as exciting as you remember. One thing that really got to me as I played was that if you want a ride to play any kind of music whatsoever you need to set it to do so, otherwise the ride defaults to complete silence. Going in to ride cam for the bumper cars and watching the 2004 era models with eerily soulless smiles ride around in silence was a moment that had me almost wondering if I was having some sort of fever dream. Some of the music you can put in the rides is actually pretty alright, but it’s bizarre that even rides like the Merry Go Round default to having no sound at all.

At the end of the day I don’t know if I can think of any reason to buy Roller Coaster Tycoon 3 on Switch outside of if you are just really that desperate to get your nostalgia trip in. In a world where games like Planet Coaster exist as a more modern take on the exact same formula with many of the same features, I don’t even know if nostalgia is a justifiable position on this one. If all you’re really interested in is the idea of a portable park management sim this one is still a pretty alright entry into the genre, but it definitely still feels and looks like a game that came out in 2004. Add to that the clunky gamepad controls and I can say for sure that if you’re dead set on buying Roller Coaster Tycoon 3, the Switch is probably not the place to do it.

I waited all night for it to be released. I fail to see how any of these controls are even usable. Because their really not. The entire control aspect is glitchy and a joke. I built a pool complex and cannot get the game to reopen the ride build setting, hire employees or even switch off anything. Read all the info and cannot figure out to get out of it. I wanna build more rides but it doesn't matter what button I touch I cannot access it.

This game is the free game of the week in the Epic Store on PC, so might be worth taking advantage of that now (Sept 24th - 30th) if you are interested in the game, especially with the better controls. Its a shame about the controls since other games managed to pull off decent Switch/console controls that really help make the game playable without a mouse (Civilization 6).

lol Im installing it now. I've been waiting for it for a week or 2 now since it showed up on the epic games store in the future free games section.

I played a little bit of it. Its real dated.