The style of The Big Con scratches a very particular itch. With a bubblegum ‘90s Nickelodeon cartoon aesthetic, this vibrant adventure game feels tailor-made for anyone who grew up watching the likes of Doug and Rocko’s Modern Life. It even has a catchy theme song from Rockapella (aka the group who did the “Where in the World is Carmen Sandiego?” theme). But for how specific the vibe is, The Big Con does enough to not be limited to fans of its inspirations. This is a well-crafted, quirky-to-the-max adventure game that builds a weird world that is endearing and enjoyable to explore. 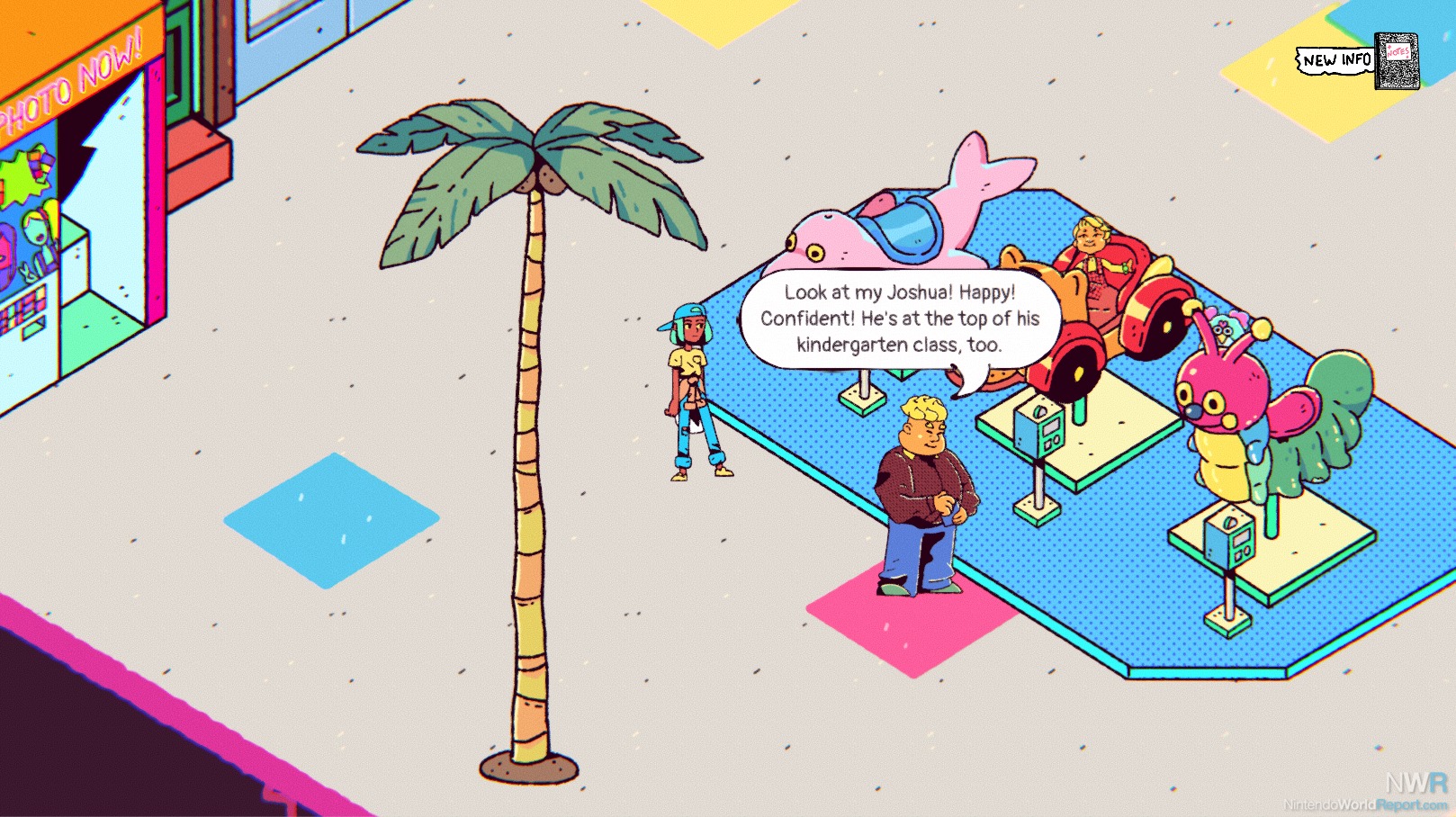 You play as Ali, a teen who finds out her mom’s video store is drowning in debt and goes on a quest to repay what’s owed by any means necessary. She soon finds herself in the middle of the titular large con and along the way steals anything she can get her hands on while tricking whomever she can into giving her money. From a certain perspective, it’s a little off-putting that our heroine is stealing toys from children and robbing every single person blind, but because of the way the world is designed in an almost otherworldly manner, the escalating crimes at the core of the story never dragged down the entire experience. In a world where most games are focused on murdering your enemies, it’s a relief to see a different type of transgression in a game.

The story takes some twists and turns as you travel to a handful of different locations, but the more amusing parts are the various subplots and side characters you encounter along the way, whether it’s the fervor over Furby-esque Burblos or recurring interactions with a hack comedian. I appreciated how overall inclusive and welcoming the plot was as well. It’s nice to see a largely comedic story not relentlessly punch down.

I’m not normally a huge adventure game guy, but this handled a lot of the genre tropes better than I’ve seen. Most of that is helped by the fact that you have an in-game quest/activity log that does a great job of tracking what you can do and what you need to do to progress. Each location has a similar structure of needing to accumulate enough money or certain items to move to the next one, but it’s very open-ended in how you can do so. You can complete more complex quest lines or just go around and pickpocket every person in sight. The quests are almost always interconnected, requiring you to fully explore the nooks and crannies of levels to find key items, characters, or clues. I rarely felt flummoxed in my initial playthrough, largely because of the variety of ways you can earn money. 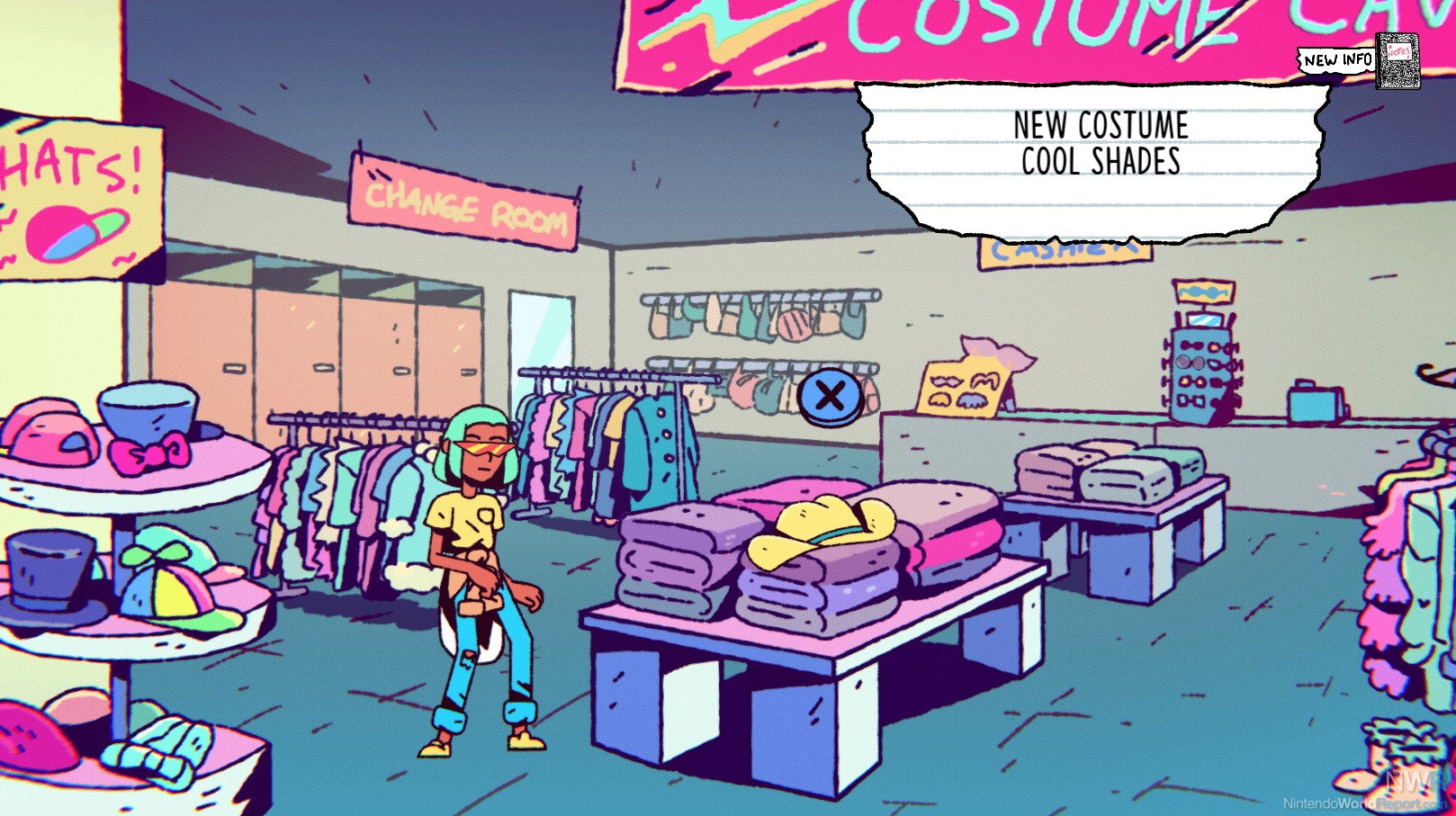 Pickpocketing is the most action-oriented part of the game, where you have to time a button press on a moving meter. If you mess it up, you get busted. Get busted a few times and you, well, I won’t spoil the surprise but it’s clever. Especially when you’re dealing with bigger sums of cash, this mini-game gets tough, but all sorts of difficulty options make it so you can tweak what parts of the game are harder or easier. It’s very nice and cozy, emphasizing that The Big Con is more about the ride than the challenge.

The Switch is the “Grift of the Year Edition,” following the original launch in summer 2021 on Xbox and PC. A few added puzzles lengthen the game a bit, taking what was a three-ish-hour adventure up to around the four or five-hour mark. Alison’s imaginary (or so we think?) helper Rad Ghost gets more time to shine in the new version through a simplistic arcade game. Outside of the new content as part of the Switch launch, the port itself ran fine in my experiences, aside from a lengthy initial load time. Any sort of technical trade-off is worth it because I found this game most enjoyable in handheld mode.

The Big Con is a stylish adventure game that feels more playful than mystifying, nailing a good balance that opens up to a wider audience than most of its kind. The ‘90s Nick feel definitely makes it more appealing to those of a certain age, but the goofy period piece design of the world is unspecific enough to not feel impenetrable if you don’t know your Skeeters from your Stimpys. The charm far outweighs the thievery for Ali as she tries to save her mom’s video store by robbing the world blind.