Voice of Cards: The Isle Dragon Roars, from Yoko Taro and others who worked on the Nier and Drakengard games, is not a 40-hour RPG. It's not even a 20-hour RPG, unless you want to do absolutely every last thing the game offers. No, it takes a breezy 8 to 10 hours to roll credits, and that's largely a good thing. What's most interesting about Voice of Cards is how it takes a handful of familiar elements and creates an experience that feels paradoxically like a known and unknown quantity at the same time. While it might be a few cards short of a full deck, Voice of Cards offers its fair share of RPG intrigue.

After an introduction from the voiced narrator, who also plays the role of game or dungeon master, the story proper begins in the Castle of Advent, where the queen has summoned adventurers from near and far to complete a single task: dispatch of a recently awakened dragon. From there, you are introduced to the protagonist Ash, whose name you can change, and his travelling companion Mar, who looks something like a sea lion or small whale. If you played the demo of Voice of Cards, you'll be familiar with the Ivory Order and three of its main members: Berwyn, Wynifred, and Heddwyn, who also accept the queen's challenge. By and large, the main story involves the pursuit of the dragon, but there are some interesting twists along the way. There’s also lore and background info to unlock from destroying each monster type multiple times. Given its brevity, I don't want to say much more about the story but it's solid enough to compel you from start to finish with its mixture of humor, sorrow, and tension. 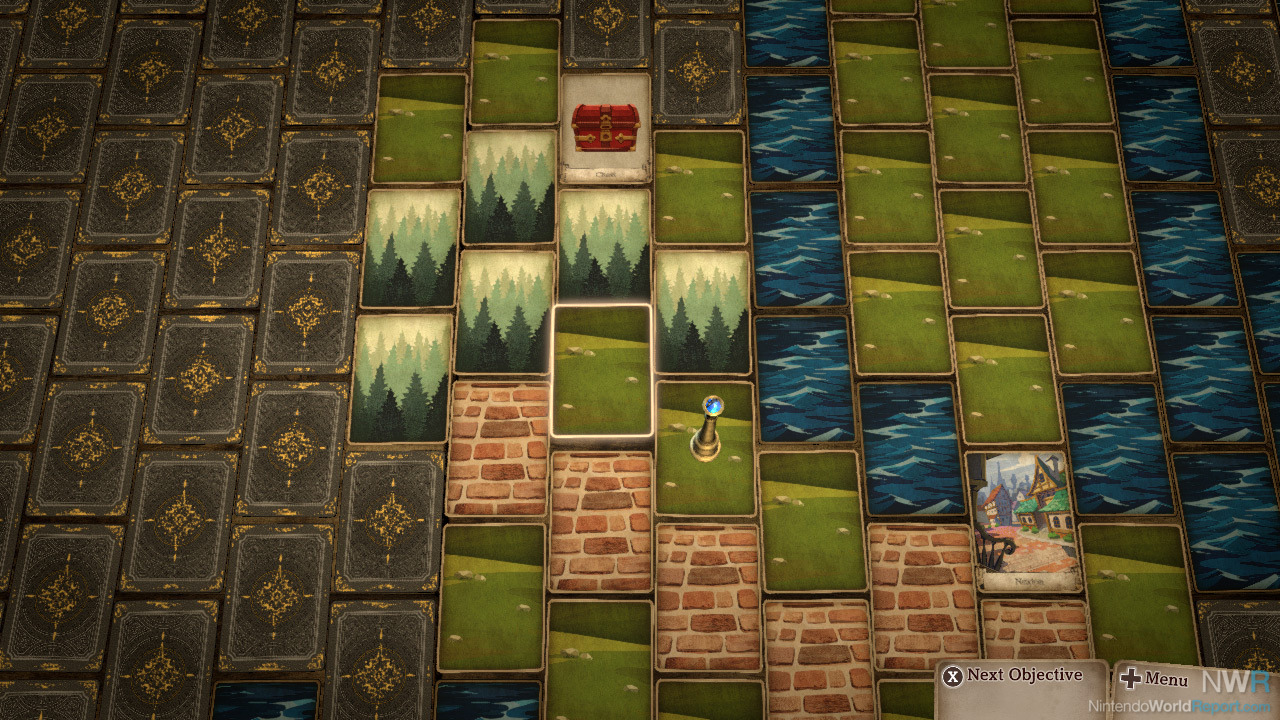 It's the presentation of Voice of Cards that sets it apart from other RPGs. Playing out on a large table top surface, whose edges you can actually see if you scroll the camera to the sides of the map, cards are laid out in order to depict towns, seas, caves, plains, roads, and other landforms and structures. Outside of cities, every step of your avatar flips over adjacent cards to reveal the terrain underneath, and sometimes treasure chests, signposts, or even special events. Dialogue and narration derive from the same source, and while the voice work is good, it lacks variety and emotion. This may be in service of the tabletop aesthetic, but there's a reason why most games use distinct voices for the narrator and the characters. The sound effects, fortunately, work very well and really sell the idea of playing an extended session of a tabletop RPG. Keiichi Okabe, who composed the Nier: Automata soundtrack, brings a wonderful collection of music to the game, although the number of tracks does feel limited.

In the overworld, you'll maneuver what looks like a chess piece from card to card as you move from one destination to the next. Towns contain your typical RPG mainstays: inns, item shops, armorers, and villagers to converse with. Speaking to everyone in town is often part of your main objective, but it's worth doing so even when you don't need to as some interactions can lead to earning a mysterious card. Collecting all of these is necessary to unlock the best possible ending. While so many of the towns and other environments can end up looking very similar, there are a number of unique people you'll encounter along the way that add much needed spice to this literally card-based adventure. 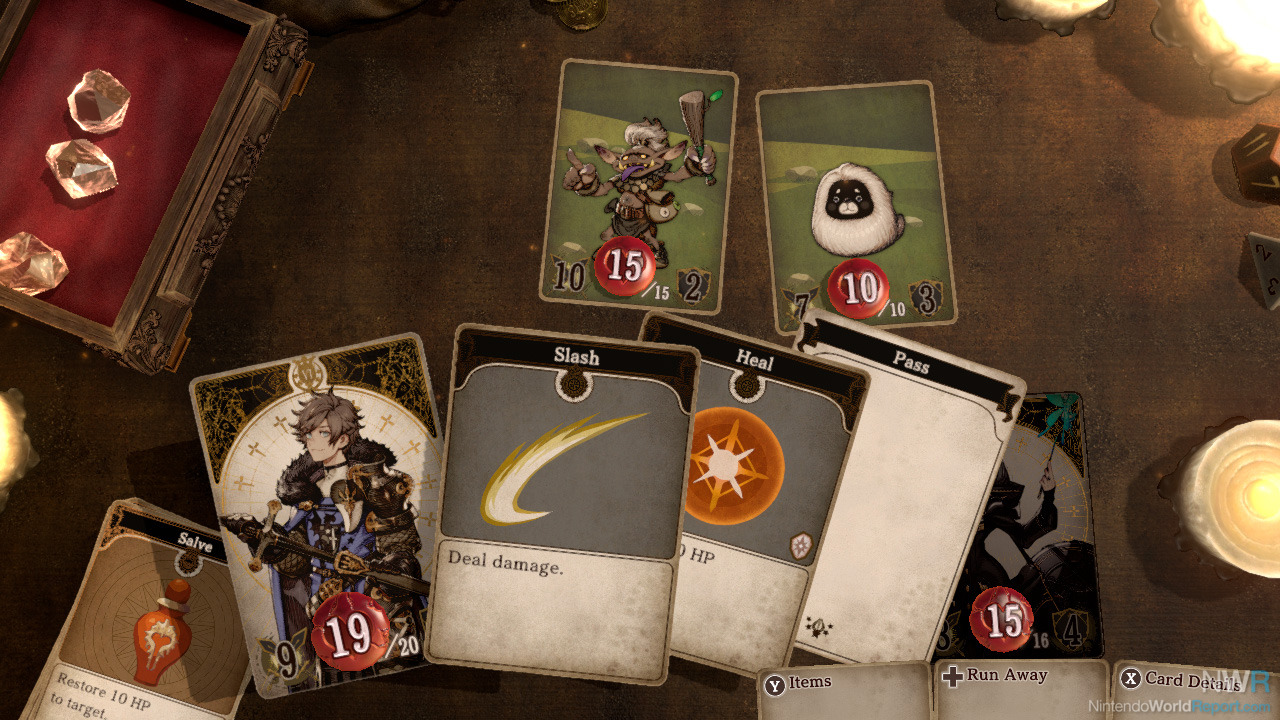 In dungeons and outside of towns, random battles occur with regularity, perhaps too much so. Given that Voice of Cards likely won't be too challenging for RPG veterans, it's a bit surprising that the encounter rate is so high. In new game plus, which unlocks after you roll credits for the first time, you do get an item that effectively turns off the random battles, but during your initial playthrough it may be worth running from a decent percentage of fights. I avoided about half of random battles and only faced a bit of difficulty in the game's final dungeon.

As for the turn-based combat itself, your party of three takes on up to three enemies at a time. Each member of your crew can carry up to four abilities into battle, in addition to three passive skills that they learn over time. Every character has a basic attack that doesn't cost any gems to use and eventually acquires an ultimate attack that can require spending up to five gems. Gems basically function as a pool of magic or skill points that your party draws from to power their attacks, with a single gem being earned at the start of each combatant’s turn. You can only hold a maximum of 10 gems at a time, but you'll almost never get close to that cap. Overall, it's a simple enough system that works well and ramps up in strategy as you pick up more costly moves and see new characters join your ranks. 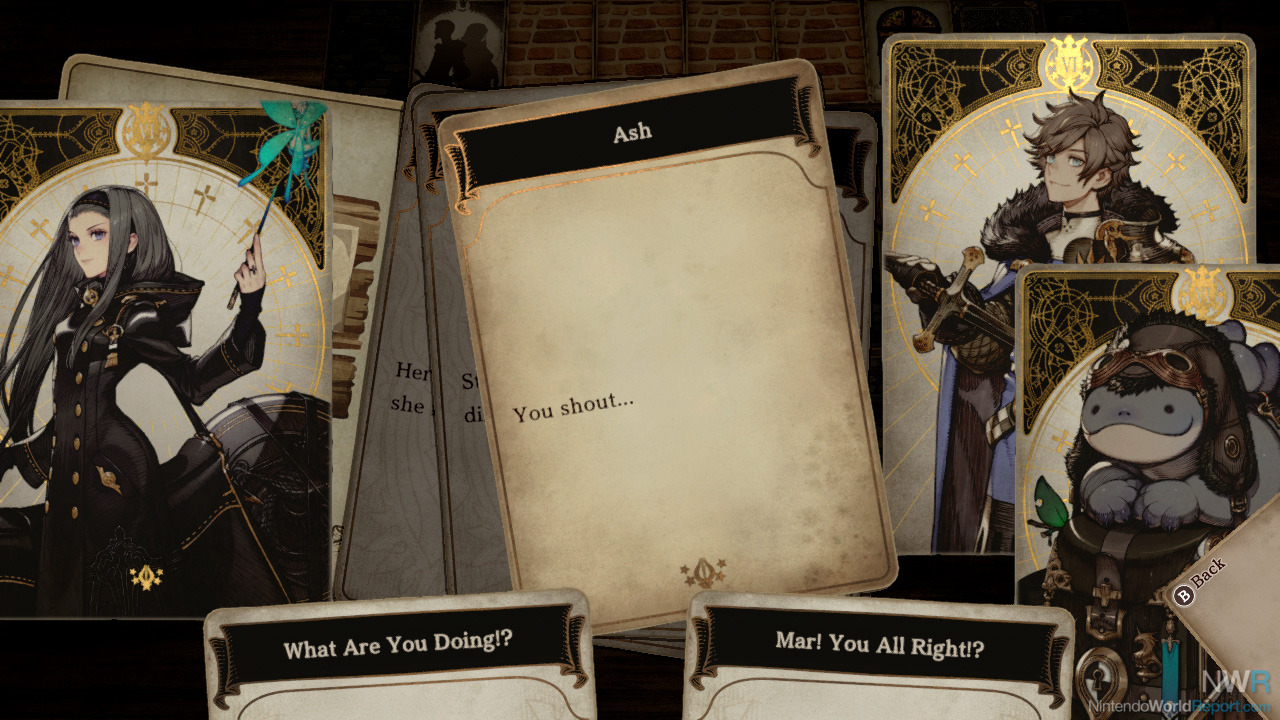 After completing the main game once and then doing a quick jaunt through new game plus, I'm left wanting more Voice of Cards. While I enjoyed what I played and I do like the idea of a shorter, more brisk RPG, it feels like the game's presentation is being asked to do some very heavy lifting. Another chapter or two and a few more playable characters could really elevate Voice of Cards into must-play territory, but as it is it's more of an interesting experiment that delivers in the moment but might not create a lasting memory. The use of cards to create a fantasy world and tell a simple but engaging story is fascinating to be sure; I just want more out of it. There aren't many places to explore, random card events in dungeons and the overworld are repeated frequently, and everything comes to a close too soon. Without question, Voice of Cards represents a great entry point for RPG newcomers that employs a compelling and unique aesthetic. If you've shuffled your way through most of the RPGs on Switch, however, you might find this Isle Dragon more of a whimper.