These three warriors are after high stakes, but they’ll have to avoid the Whammies.

Babysitting was one of the hardest things I ever did before I fell into my current job, and I know the perils of a long commute. But I never imagined that I would see something as bad as Has-Been Heroes, Frozenbyte’s latest fantasy-themed adventure. The game borrows aspects of Trine in its character composition, but the core gameplay is wildly different. It’s a fun adventure, but I’ve reached the point where I’ve started cursing the Random Number Deity in Latin. 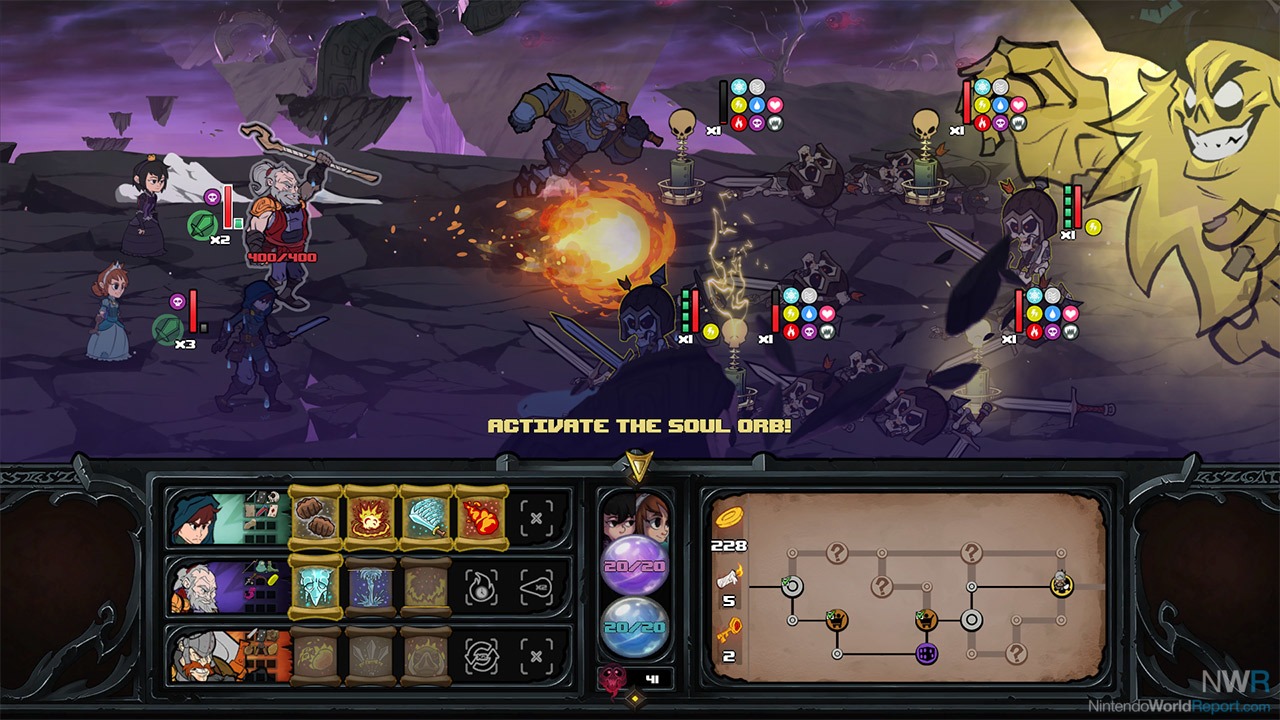 There’s a simple story in Has-Been Heroes that gets fused with aspects of roguelikes, lords management/MOBA combat and Plants vs Zombies. The party starts with a dashing, young Rogue who encounters what appears to be the last two living members of a kingdom’s main combat unit – a mage and a swordsman. Their mission is to bring the king’s daughters to school, but their path is filled with row upon row of skeletons and other demonic punching bags. Combat is explicitly row-based, as you control three lanes that the heroes stand on the left side of and attack enemies from the right. Each randomly-generated map sees a few battles and shops laid out before fighting a boss, and if two bosses are defeated, new maps and heroes are unlocked. Otherwise, new tools are offered for use depending on the number of things killed and the heroes try again.

In Has-Been Heroes, “if” is the key word. The randomness will get you eventually, and I quickly found myself staring at a 0-23 streak where I didn’t even get out of the first area, whether it was an icy forest or a dark one. Enemy placement, what items spawn, how much gold drops; all of it affects how the run will go. In the best runs, I could get as far as the second boss and manage to take about half of its health down before one of the heroes got hit a second time and died. There’s no revival that I was able to locate either, so one death forces a restart. Has-Been Heroes is definitely not recommended for the easily frustrated, or those who might fling a Joy-Con controller through a window, TV set, or other nearby expensive object.

The controls were another aspect that required some early adjustment. Navigating the map is done with the right analog, and R locks in movement. It took about two minutes after I cleared my first scene to figure this out since I’m not sure how many other games use the right analog for movement. Switching heroes between the lanes also can be a bit tricky for the first few attempts, and it wasn’t until late into the first night I played that I figured out hitting L was opening the spell menu (instead of just stopping the clock). Once I got past the control quirks, I was able to consistently press onto the second area unless there was a really bad enemy draw.

The Trine games on Wii U had great sprite art, and Heroes continues this roll. Although most of the enemies looked to be standard-issue skeletons, there are enough little touches on them that each type is noticeable and helped me develop strategies. The main characters are well animated. Although the music sounds fine at first, it faded into the background in favor of the sound effects. The crunch of an enemy kill or the sizzling after I stunned it with a fireball kept me trying again and again, even after I got wiped out. It’s great to have this type of game portably, as I was able to squeeze in an attempt or two in between phone calls at work. I didn’t notice any performance issues while running the game in any of the Switch’s modes.

I wish I would have gotten an opportunity to meet more of the Has-Been Heroes, like the anthropologist who became a luchador, and someday I will get there. Most roguelikes cause me to give up in frustration, but Has-Been Heroes is fun enough that I want to keep playing and someday have “teh urn”.

If you've played Binding of Isaac and other rogue-likes where would you put the relative frustration/randomness factor for this one? I love rogue-likes but the mechanics of this one don't seem to be as much focused on your ability somehow since there are lanes/etc instead of something like bullet hell where some people are simply more suited to it than others. I want to believe, but it's hard.

Oh yeah, and watching the Treehouse presentation for this a while back was thoroughly un-exciting and actually put me off. Once you "get it" the game is engaging I take it? :)

The last roguelike I put any significant time into was One-Way Heroics, and HBH was a bit less frustrating than that. I definitely made more progress here.

Thanks for the review, Donald. After spending most of yesterday with the game, I think your score is fair.


One thing I wanted to point out in case people are curious about this game is that I don't think it's a strategy game. It's a puzzle game with rogue-like elements thrown in. The skeletons are like puyo puyo pieces, tetriminoes, etc. Each one has to be hit a number of times (stamina) before damage can be done to them, and the player has to figure out how to manage his players that can hit once, twice, or three times in order to efficiently damage the skeletons.


Once I viewed the game this way, it clicked for me. I don't expect a perfect run out of Tetris. The randomness will get you eventually. Has-Been Heroes is the same. If you are into puzzle games, this one is excellent.