Why is this relevant now? Well, at least one current Switch game and a potential re-release is probably affected.

A new European ratings board ruling has gone into effect that would have a major effect on current and potential future Switch releases.

The PEGI board has determined that references to gambling would result in an automatic 18+ rating: according to reports, this actually began in early 2021. A... Read more...

Chuhai Labs has today announced their next title, Cursed to Golf, will be coming to Switch along with PC via Steam in 2022. This 2D golf game tasks the player with escaping from Golf Purgatory in your quest to become a golfing legend. All while avoiding deadly traps and hazards.

We've teamed up with Q-Games to celebrate their 15th Anniversary of Star Fox Command! 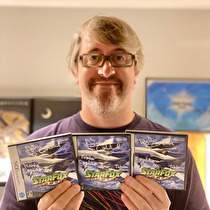 Q-Games is a developer that should be well known to most Nintendo fans. From Star Fox to Pixeljunk, they've left quite an impression in the libraries of many a Nintendo game. This week they're celebrating their 20th anniversary as a company as well as the 15th anniversary of Star Fox Command, and they've teamed up with us here at Nintendo World Report to help get the festivities in motion.

A lot of old school this week, though some of it will repeat next week.

In what I thought would be an incredibly quiet week before checking the Canadian game list and then re-checking the US one, it was surprisingly difficult to come up with a main game - NIS America's classics collection (containing Soul Nomad and Phantom Brave) put up a brave front, but we'll give the... Read more...

After a couple of Japan-only remakes, the first two Monster Rancher games are coming out worldwide.

Koei Tecmo have announced Monster Rancher 1+2 DX for worldwide release on December 9. A price in the West has not been announced, though a limited edition will be available in Japan with a backpack and metal figurine among other items.

Other Announcements From "Opening Night Live" At Gamescom Switch

A few items of note for Switch owners, including why you don't mess with the Fourth Estate.

A new trailer for Teenage Mutant Ninja Turtles: Shredder's Revenge aired which saw the 4 player brawler slip to next year, but... Read more...

The Samuel L Jackson of the Persona 5 Strikers team joins a rather motley Sega crew.

The party for the Super Monkey Ball franchise will be getting some late arriving guests from Japan.

Original characters and X-Men - what a time to be alive.

Some of the darkest corners of the Marvel universe are headed to Switch in a new tactical RPG.

2K have revealed Marvel's Midnight Suns will launch on Switch in March of next year. A tactical turn-based RPG developed by Firaxis, Ghost Rider (Robbie Reyes version), Nico Minoru, Wolverine of the X-Men and Iron Man will be among the 13 heroes in the game.

by Donald Theriault - 9:27 am EDT
Discuss in talkback! Source: Nintendo

The "Wario Cup" is weekly because not even Wario would want to crunch enough to make it daily.

It won't just be playing against the house in the new WarioWare.

Nintendo released a new trailer for WarioWare: Get It Together which in addition to revealing the character roster, also showed off two new multiplayer modes. "Variety Pack" mode pits local players and their chosen WarioWare stars against each other in exclusive games, while the Wario Cup is a weekly-rotating online score challenge.

I would quote this week's major protagonist but Travis Touchdown would prevent us from keeping this space rated E.

Travis touches down one more time on the Switch this week as the world's leading assassin takes his act to SPAAAAAAAAAACE in the week's major release, No More Heroes III. The game voted too hot for Treehouse drops Friday, but if you're looking for something with just as much murder but want to take it slow, may we recommend King's Bounty II on Tuesday.

WarioWare: Get It Together! Demo Available Switch

Wario probably crunched the devs to get it there.

The next first party release for Switch now has a demo.

A demo for WarioWare: Get It Together! can now be downloaded from the eShop in North America. Nintendo's announcement has confirmed a "selection of minigames", but was not specific on how many that entails.

Some news from the perpetual state of Nintendo (or so the rest of the internet would have you believe). UPDATED

UPDATE August 20: After the eShop update today, the Slayers Collection price increased to US$49.99 and C$66.99. This would bring it in line with the cost of the physical release, which will be available on September 3. Original story follows.

In addition to Quake's launch, a couple of Doom-related announcements for the Switch went down today at the opening day of the digital QuakeCon.

It won't require shoving nine inch nails through your fingers to play the other ID shooter.

Another classic ID shooter series of the 1990s is now on Switch.

Quake, Id Software's follow up first person shooter series which debuted in 1996, has been remastered for modern platforms as part of a 25th anniversary celebration. It is available now on the eShop for US$9.99 or equivalent.

A new twist on the life of a supervillain's henchman is coming to Switch in October, and it has writing talent experienced in subtle parody.

Henchman Story has confirmed a release date on Switch of October 14 in a new trailer (available below). It is an adventure game starring Stan, a down-on-his-luck henchman of the evil Lord Bedlam who has to try and survive while his boss sets out to destroy the world.

There's no getting off this train.

Turnip Boy is looking to add some more charges to his tax evasion arraignment.

The April-launching adventure will launch an update a week from today which will include support for the "Limitless Line" free DLC. Available after completing the game, the Limitless Line is an endless dungeon with randomly generated areas.

Other News From The August 18 Pokemon Presents MobiSwitch

They had a lot of time, but a lot of other items to go over.

Pokemon Unite's mobile version was slated for a September 22 launch, with pre-registration open now. Costumes will be awarded if there... Read more...

Evolving based on absorbing the souls of its dead brethren... we got nothin'.

We got the first look at the new Pokemon Legends: Arceus in today's Pokemon Presents:

The focus of the game is completing "expeditions" in order to complete the Pokedex of the Hisui (later Sinnoh) region. Multiple environments will be in play, along with a time where Pokemon become enraged. Pokemon... Read more...

The summoning circle worked, we have Houndoom.

New details for Pokemon Brilliant Diamond and Shining Pearl were unveiled ahead of the duo's November 19 launch in today's Pokemon Presents presentation.

The original "Underground" has been expanded to the Grand Underground, which will feature "Pokemon Hideaways" that allow for battle and capture... Read more...

Risk of Rain 2 Receives its Anniversary Update On Switch Today

Featuring the Bandit, an updated Commenement, and more!

After five months, the Switch version of Risk of Rain 2 will finally be receiving the free Anniversary Update, adding a plethora of new content.

Originally released on PC in March (as well as Xbox and Playstation consoles in June), the Anniversary Update celebrates a major milestone for the game... Read more...

There's about 391,496 possible shadowdrops this week - which after last week is kind of low, actually.

After - wait, SEVEN Indie World shadowdrops in one day, are they MAD? - it's back to relative normalcy this week. For my money the big game of the week is itself an Indie World veteran in Road 96, with enough paths to keep you going for the rest of the summer. I'm also going to put someone on blast... Read more...