Well, it's now the week of hope (or despair, depending on your choices) as the Danganronpa Decadence collection is split up for individual release on the eShop this Friday. All four of them. There is a preorder discount for all four of them... and we'll have more on why this is important shortly.... Read more...

One of the most bizarre yet beloved games of 2020 will hit Switch next spring.

Atlus announced a Switch version of 13 Sentinels: Aegis Rim will release in April of 2022 in Japan during a celebration of the game's second anniversary in the country: the Western branch have announced it will release outside Japan on April 12. It was previously on the PlayStation 4, while a PlayStation Vita release was scrapped due to the system's end of life.

The perfect (?) game for those holiday travels.

Yacht Club Games is not afraid to drop things in December, and we received another example of that today.

Preorders have now opened for Shovel Knight: Pocket Dungeon, the Wario's Woods-styled puzzle game / dungeon crawler set in the Shovel Knight universe. The game is slated for release on December 13.

Bowser spitting internal fire on this one.

An email from Doug Bowser sent to all Nintendo employees on Friday has clarified Nintendo's stance on the ongoing culture of harassment at Activision Blizzard.

Following the publishing of an expose in the Wall Street Journal (possibly paywalled) this past Tuesday, Nintendo of America sent an email to all hands at Nintendo of America on Friday that was obtained by Fanbyte. In the email, Bowser underlined the seriousness of the allegations:

Let's face it, we know what you're here for.

In a week that's totally devoted to the sale that has already kicked off in Europe and will hopefully start a few hours away from starting in North America, there are a few new releases to talk about. The big one for me is DoDonPachi Resurrection from the eternally popular bullet hell franchise, with The Man also stepping up to provide Death's Door from Devolver Digital.

A surreal announcement years in the making.

eSports Company Panda Global announced today that they're teaming up with Nintendo for a Super Smash Bros. tournament circuit in 2022.

The circuit bills itself as the first circuit to be officially licensed by Nintendo in North America. Though few details were given, Panda Global founder Alan... Read more...

by Donald Theriault - 9:36 am EST
Discuss in talkback! Source: Konami

It doesn't matter if you win, lose, or DRAW A MONSTER CARD!!

It looks as though the latest entry in the Yu-Gi-Oh series will be coming west after all.

Konami's European branch have confirmed a release for Yu-Gi-Oh Duel Rush: Dawn of the Battle Royale in the region on 7 December. The "high speed" version of the popular children's card game released in Japan this past August.

by Donald Theriault - 9:23 am EST
Discuss in talkback! Source: Nintendo

...can we just ask you to check your wishlist and be done with it?

Nintendo has kicked off their Black Friday offers in Europe and Australia with an absolutely gigantic sale.

This is the game that doesn't end, yes it goes on and on my friend...

A beloved roguelike will make 2021 on Switch as promised.

Devolver Digital have announced a December 9 release for card-based "endless RPG" Loop Hero, which released on PC earlier this year. The game will be $14.99 US, with a 10% preorder discount.

The game takes place in a world destroyed by an evil lich that the player is working to rebuild.

They literally could not have timed this any better considering it's going on sale soon.

Just ahead of its Black Friday sale, more content has come to Mario Kart Live.

The app update, available now, allows for two karts to race splitscreen on the same Switch and also adds a new "Relay Race" multiplayer option that supports up to 4 players. Relay Race can be played with any Grand Prix course set.

A demo for the last Nintendo release of 2021 is now available.

Big Brain Academy: Brain vs Brain - due for launch December 3 - now has a demo available on the eShop. According to Nintendo's announcement post, a "selection of activities" will be available for the multiplayer brain game.

Can I really say I didn't pay for Brilliant Diamond if I had to spend $1600 to get it?

It's a light week because of the Steelix in the room - Pokemon Brilliant Diamond and Shining Pearl are your monstrous games of the week. And considering I technically paid no money for Brilliant Diamond (thanks to Gold coins) I'm looking forward to being able to play Diamond and Pearl without an effective... Read more...

Hey, we got actual numbers this time!

Nintendo's first month of US sales for the Switch OLED kicked off what the company hopes will be a new, extended winning streak in the console realm, according to the NPD Group.

All data based on dollars from October 3 - 30, unless otherwise noted. Nintendo does not present digital sales to the survey, though some third parties do present their eShop sales as applicable. 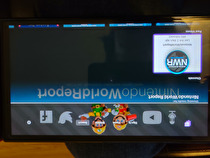 It's now possible to see NWR TV on Twitch on the Switch.

A Twitch viewing app has now been added to the eShop as a free download. Currently, it only supports viewing of existing channels and cannot be used for live streaming directly from the console.

Streaming apps have been added to the Switch at a pace of approximately one a year, with Twitch joining Hulu (Plus), Youtube, and anime streaming service Funimation.

Well, it's not like we needed Pal Park anyway.

The Pokemon Company has revealed what will replace one of the more famous structures in Pokemon Brilliant Diamond and Shining Pearl - and it'll be legendary.

A new trailer has revealed Ramanas Park, which appears to be replacing the "Pal Park" which was used for catching Pokemon brought from the... Read more...

If that seems abrupt, it is for Switch owners.

Licensing hell is about to make another 2020 game a limited time event.

Bandai Namco have announced a two stage shutdown plan for Jump Force: Deluxe Edition, the crossover anime fighter that released on Switch in August of 2020. The game will be delisted from the eShop (along with its DLC) on February 7, and only basic online play (no rankings or rewards) will be available after August 24, 2022.

No OLED deals this year from the big N.

Nintendo of America has announced their plans for the annual rendition of late stage capitalism known as Black Friday.

The standard Black Friday hardware bundle will return for the week of November 21 (Sunday), with a Switch system, Mario Kart 8 Deluxe, and a three month individual Switch Online membership for US$299. As with last year's, this will use the 2019-revision of the Switch (increased battery life).

This week's downloads are brought to you by the letter M and the number 18.

Well, we all know what the headliner is this week because I reviewed it last Thursday and this is my goddamn column, if you have a problem with that send your application for news writing to johnrairdin at nintendoworldreport dot com*, Shin Megami Tensei V. The long, long awaited demon RPG drops Friday,... Read more...

Friendships will be forged and quickly ended.

On Friday night to celebrate the release of Mario Party Superstars, the NWR Twitch Channel will be putting on the inaugural edition of Mario Party Monthly! Every first Friday of the month, we'll be diving into the deep end with full online Mario Party games featuring members of the NWR staff (and maybe occasionally special guests)!

Nintendo released their fiscal second quarter sales results at the close of business in Japan today, and a slow second quarter release-wise still resulted in major gains from the last non-pandemic year of 2019 - though YoY comparisons are still unfavourable compared to 2020. As well, Nintendo has made revisions in both directions for their projections.