(The end of the work day fills you with determination)

Undertale's mercurial creator has released a PC Demo that may portend a full follow-up to his smash hit.

Deltarune has been released for Windows PCs today, which is a game with a similar art style to Undertale. Some Windows users will have to bypass Defender to install the game.

So the least expensive option overall is the most popular, and this is somehow surprising.

Nintendo held an investor's briefing this morning (JP time)/tonight to follow along from the earlier financial results, and several items have emerged from it. The full presentation can be viewed here (PDF link), with the Q&A to follow in a few days.

We'll set aside the pachyderm on the premises for a moment. 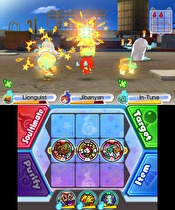 Sega has tabbed the "Sega Genesis Classics" card to release on Switch on 12/7, the same day as Super Smash Bros. Ultimate. More than 50 games will be included in the package, along with the ability to play in a mirrored mode and instantly rewind.

Bubsy: Paws On Fire To Attempt To Climb To Top Of The Yarnball In 2019 Switch

It is with a heavy heart that we must report that Bubsy the Bobcat is returning to Nintendo platforms.

Bubsy: Paws on Fire has been announced by the revived Accolade for release on Switch in Q1 2019. Developed by Choice Provisions, the game is an automatic runner similar to their Runner series. Four characters will be playable, including a character not seen since the failed pilot of a Bubsy animated series in the mid 1990s.

"Leaks" are about to get wrecked. 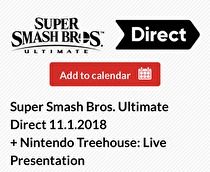 Reset the clock: we have a Direct.

A Super Smash Bros. Direct will air on Thursday, November 1 at 10 am Eastern time/7 am Pacific. The video is expected to run for 40 minutes.

The road to 20 million is paved with fainted Pikachu.

All figures expressed in yen, with comparisons to US dollars at press time market rates of $1 = 112.782yn.

The folks at Forever Entertainment will be busy next year.

A couple of turn-based PC hits will be hitting the Switch next year from Forever Entertainment.

Hard West: Complete Edition and Phantom Doctrine will both release on Switch in 2019. As the name suggests, Hard West takes place in a fantastical version of the American West, while Phantom Doctrine is a spy strategy game set in the Cold War.

Over/under on quality GIFs in the Talkback thread is 2.5.

A new system software has just launched for the Switch.

Version 6.1 of the system software launched earlier this evening. No new features were added, as the update is largely for resolving an issue with games not detecting new Switch Online subscriptions and the ever-useful system stability.

Updates are also available for the Joy-Con controllers.

by Donald Theriault - 5:01 am EDT
Discuss in talkback! Source: Nintendo

I hear there's a cow level this time.

Last week broke the planning sheet with 36 NA releases, but this week isn't in that territory - at least as of press time. The big one is Diablo III: Eternal Collection, which brings the premiere third person looter to Nintendo consoles for the first time ever and Blizzard for the first time since... Read more...

Building a userbase one fishing pole at a time.

Nintendo's plans for Labo include a push into education.

In concert with the Institute of Play, schools in New York State have begun to receive Labo kits for use in science, technology, engineering, art, and math courses. The plan is to roll out into more than 100 schools across the US through the rest of the 2018-19 school year.

2019 will see at least three Resident Evil titles on Switch.

Capcom have announced that ports of the original Resident Evil, Resident Evil 4, and Resident Evil 0 will all come to the Switch in 2019. No specific release dates have been given, nor details on plans for physical release.

Starting from the back of the grid for extra quality.

Sega has dropped a caution flag on Team Sonic Racing for several months.

Originally slated for a winter release, the new Sonic racer will now take the green on May 21, 2019. The delay is for additional quality assurance for the title.

Have you ever danced with the dinosaurs in the pale moonlight?

The end of November will bring a horde of prehistoric horror to the Switch.

Studio Wildcard have announced that ARK: Survival Evolved will release for Switch on November 30. More than 100 dinosaurs and other beasts of legend will be available for hunting, including T-Rex and the Yeti.

The game will release in stores as well as on the eShop on the 30th.

by Adam Abou-Nasr - 9:50 am EDT
Discuss in talkback! Source: Niantic

Trainers can opt in or out of the new feature and will receive weekly summaries tied to currently unannounced rewards. Adventure Sync connects to Apple Health and Google Fit to integrate with other health and fitness apps.

In a heavy month for the 4K twins, the Switch has held its fire for November and December.

According to the NPD Group's September survey, running from September 2 - October 6, the Switch was down compared to last September. The survey reported increases in dollar sales for the Xbox One and PlayStation... Read more...

Some news for fans of random generation out of Europe

The roguelike family on Switch is going to add a new member in early November.

A listing for Rogue Legacy, Cellar Door Games's 2014 roguelike, has appeared on the European Switch eShop. The release date shows 6 November, and the price is €14.99/£10.99.

While the other platforms get to deal with realistic horse genitalia (the obvious result of 100 hour work weeks for over a year), the Switch has a busy week on its own. In fact, the number as of press time for Nintendo releases is 30, though that does include the physical release of a Wii game (in... Read more...

by Donald Theriault - 6:44 am EDT
Discuss in talkback! Source: The Pokemon Company

There's going to be a lot, but someone is only going for six. 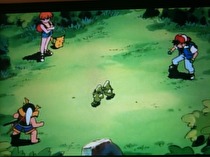 Kanto has added a group of obsessives for Let's Go Pikachu and Eevee.

"Master Trainers", trainers who specialize in a single Pokémon, have been revealed for the November 16 release. These Masters will be found around the region and will be signaled by an icon of the Pokémon they represent appearing over their head.

The great crossover of Grant Kirkhope and Perry.

A latter-day 3DS title is coming to Switch, and the soundtrack has attracted an all-star staff that includes one of our own.

Chicken Wiggle Workshop, a Switch version of the Atooi-developed 3DS title, has announced that the Switch version will feature an orchestral remix of the soundtrack. In addition... Read more...

by Donald Theriault - 7:01 am EDT
Discuss in talkback! Source: Nintendo

The drop rate for this loot is bonkers.

November is now up to three special Switch bundles, and the newest one is a real devil.

A bundle for Diablo III Eternal Collection will launch on November 2nd, alongside the base game. The bundle will include a decorated Switch and dock, a download code for the game, and a carrying case for US$359.99.