The latest product of the Tokyo RPG Factory launches early next year.

The latest project from the Tokyo RPG Factory has been revealed and will be coming to Switch early in 2018.

Lost Sphear (pronounced like "sphere") is the follow-up to March's I Am Setsuna, and features a party led by a young boy named Kanata who are trying to restore portions of their world that mysteriously vanished. The battle system will allow for real-time character position adjustments.

It's all about bread and Afro Circuses.

After a rumble in Tokyo, the next River City title for 3DS will kick it old-school.

Natsume announced today that 2014 Japanese eShop title Nekketsu Maho Monogatari will come to the eShop in North America and Europe this summer as River City: Knights of Justice. The River City crew have been transported to ancient times and use traditional RPG weaponry (swords, staves, magic) to save the land of Riverlandia.

Save transfer will be happening for Japan, at least.

Following last night's announcement of Monster Hunter XX for Switch, Capcom has revealed the release date and more details about how the title will work with existing Monster Hunter games.

The game will release on August 25 in Japan for ¥5800 (before tax), with a Switch bundle including a special system and dock design releasing the same day for ¥36,280. It appears the bundle will include a physical copy of the game.

Capcom reconfirms their commitment to Switch with their biggest gun.

One of Japan's biggest franchises is making the jump to Japan's hottest dedicated gaming device.

Capcom has announced that Monster Hunter XX will be coming to the Nintendo Switch, though no release date has been given. The game has sold over 1.5m copies on 3DS to date according to Media Create, despite launching in Japan the week after the Switch did.

The only reunion is going to be my size ten and your buttocks.

All territories get to go to the fights this week, as Ultra Street Fighter II punches its way into various stores, so read Jared's review before you decide to dive in and pray that the online holds up. North America and Europe also have something that's designed for a single person to fight for 100+ hours as Disgaea 5 Complete has dropped, and I was lucky enough to review that as part of Tactical May.

A busy summer for the team at Inti.

As promised, Inti Creates has made a pair of game announcements at this weekend's BitSummit games festival in Japan.

A collection of the two Azure Striker Gunvolt games will be coming to the Switch on August 31 worldwide. The enhanced edition of the 2014 and 2016 3DS eShop titles will include enhanced... Read more...

In of all things, a Cat Mario video.

A video on the Japanese-language Nintendo YouTube account has revealed a host of new indie titles for the Switch.

The video is part of the "Cat Mario" series and refers to "Nyandies" ahead of this weekend's BitSummit indie game festival in Japan. Among the footage of released and announced titles... Read more...

The Switch time-on-shelf continues to be measured in minutes. UPDATED WITH NPD INFO.

An early report from Nintendo ahead of tomorrow's public US sales estimates release shows that the Switch is continuing to sell as fast as it can be stocked.

According to NPD Group estimates, the Switch sold more than 280,000 units in the United States alone in the period of April 2 - 29. Combined... Read more...

by Donald Theriault - 6:06 am EDT
Discuss in talkback! Source: Nintendo

Alm must duel the one he loves the most - and according to the fanfics, that would be Lukas.

It's a busy few days for strategy RPGs, as the big game of this week is Fire Emblem Echoes: Shadows of Valentia. We've got two reviews (Daan, Bryan) for the strategy RPG hit that I'm already in for a hundred on even before DLC is considered. Now, if only I could get it before Wednesday grumble grumble... 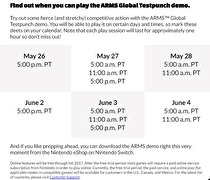 ARMS As with Splatoon, content including arenas, ARMS and fighters will be added in free updates on an ongoing basis. New characters were introduced as well: Byte & Barq (police officer and his police dog), Twintelle (a movie star who fires ARMS with her hair) and livestreamer Kid Cobra (masked in... Read more...

Bullet hell girls are headed our way via NIS America.

The legendary Touhou series of shooters will be coming to North America late this summer, and now the Switch is joining in on the fun.

Touhou Kobuto V: Burst Battle has been announced for the Switch by NIS America, who will be publish the game on September 5 in North America and 8 September in... Read more...

Mighty No 9 3DS is still MIA, but you'll get to play as Beck anyway.

Following the success of Blaster Master Zero, Inti Creates is doing the Switch/3DS multiplatform approach with a sequel to a 2014 eShop title.

Original character (DO NOT STEAL)

The newest hero has been announced for Sonic Forces, but it's not known what they look like since they are a player creation.

The "Custom Hero" feature was announced today, and features the ability to customize one of seven animals (cat, dog, rabbit, hedgehog, bird, wolf and bear) as well as their playstyle and name. Collectable accessories will allow for the hero to be customized further.

ARMS Direct To Air On May 17 Switch

Stay tuned after the credits for Splatoon 2 shenanigans. 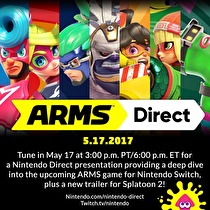 Nintendo Direct returns tomorrow, and it's going to be all about next month's big release.

There will be an ARMS Direct tomorrow at 6pm ET (3pm PT, midnight CEST) featuring the upcoming fighter, and a Splatoon 2 trailer will air as a art of the video.

Unlike the April Nintendo Direct which included multiple other announcements, this one appears to be a two-game exclusive.

The light of hope shines all over the place.

Following the re-release of Harvest Moon 64 earlier this year, the Harvest Moon series will continue its anniversary celebrations with a new entry on the Switch.

Harvest Moon: Light of Hope was announced today and features an unnamed player who has to help rebuild a harbor town after his ship is wrecked by a storm. The game is meant to be a callback to the series's SNES roots.

Can't be any more specific on the date.

A super sequel is going to land on the Switch this holiday.

WB Games announced today that LEGO Marvel Super Heroes 2 will launch this holiday for the Switch. The follow-up to the early 2016 3DS and Wii U title adds a four player competitive mode and an original storyline featuring various Marvel characters.

What kind of mobile Hyrulian adventure might you be able to embark on?

The Legend of Zelda, as well as the Pokemon Card game, may be coming to your smart device of choice later this year.

A report by the Wall Street Journal late this evening indicated that following the eventual release of the mobile Animal Crossing game, which is still due out later this year,... Read more...

Roughly 9001 hours of drumming is in store. 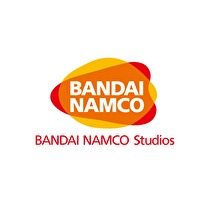 Bandai Namco has the Namco Museum coming to Switch, and three other games may be coming along for the ride.

In the company's annual financial report which released earlier today, they showed three titles intended to launch on Switch in the current fiscal year: a Taiko no Tatsujin game, a unnamed Tales-series game, and a Dragon Ball licensed game tentatively listed as Dragon Ball Xenoverse 2.

by Donald Theriault - 11:12 am EDT
Discuss in talkback! Source: WayForward

As if the season couldn't get any hotter. UPDATED: Physical version coming as well.

One of the last major eShop titles on Wii U is moving on up to the Switch.

WayForward has announced on their Twitter that Shantae: Half-Genie Hero will release this summer on Switch. No details are available about price, but the game will support HD Rumble.

Switch Is It Wrong To Pick Up Girls In A Dungeon: Familia Myth Infinite Combat Aug 11