The second Layton on 3DS already looks to outshine the first!

First of all, the graphics have seen a slight, but noticeable, improvement over Miracle Mask, the 3DS launch title in Japan. The characters appear to be more rounded with a higher polygon count, making this immediately apparent that this is a brand new sequel to its now year-and-a-half old predecessor.

The demo starts off with a cutscene of Layton, Luke and Remi (Emmy in the English language version) riding in a huge steam powered airship, flying through a snow-covered mountain to finally arrive in a remote town.

Controls are exactly the same as in Layton 5 on 3DS. You touch and drag on the touchscreen to move a magnifying glass around on the 3D screen, and tap to interact with items and people in the scene. As usual, hint coins are hidden in various objects, not only the polygonal ones in the foreground, but the hand drawn background elements as well.

After moving to another part of town an old man presented me with a simple puzzle, moving different coloured balls around to match circus seals wearing the same colour tags. The touchscreen has simple sprites to interact with, but once you manipulated them, they animated in full 3D on the top screen.

The next scene was in front of a frozen cave blocked with huge icicles. Remi's attempts to karate kick it do nothing, but a quick pull of a snowman's arm and a new path is opened up. Unfortunately, that is the point when two annoying policeman get in your way and challenge you with a puzzle. This, of course, all sounds familiar to anyone who has played a Layton game for more than 10 minutes.

This puzzle involves laying down pieces of a circular tent that the cops are trying to assemble, again with the sprites displayed on the bottom screen and then appearing in 3D on the top screen. This puzzle was much trickier than the one before as every piece of the tent has to match the adjacent piece. In fact, I noticed most people playing the demo ran out of time before completing this second puzzle.Thankfully, Level 5 were generous with the coins in the demo and gave players more than enough to buy as many hints as they needed!

This was the first 3DS Layton I had played and I went away very impressed. Both the new graphics and soundtrack gives the game a completely fresh feel that I think long term Layton fans will appreciate a great deal.

Professor Layton and the Legacy of Advanced Civilisation A is currently scheduled for a 2013 release in Japan, but people in North America can enjoy Layton's first 3D outing in just one month's time. Hopefully, this sequel won't take as long to leave Japan as much as Miracle Mask did!


I'm judge, jury, and executioner in these parts.

Bailiff, take me away.

I'm judge, jury, and executioner in these parts. 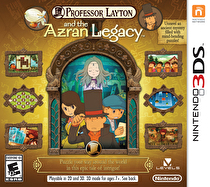