NWR played an updated demo of the graphically impressive sequel to Umberalla Chronicles at TGS.

We were shown a brand new level of the sequel to Umbrella Chronicles at a Capcom press event during this year’s Tokyo Games Show.

This brand new level had Leon Kennedy and Jack Krauser investigating a village somewhere in South America. The look was more reminiscent of the daytime African scenes of Resident Evil 5 than the previous games' dark and gloomy levels, proving that you don’t need to have all the lights turned off to scare people. I should note that Darkside Chronicles is not at all related to RE 5; this all takes place during Resident Evil 2 and Code Veronica.

Graphically, Darkside Chronicles is a step up from Umbrella Chronicles, and the character models especially took me by surprise in how good they looked and animated. At times, I second-guessed myself as to whether it was a pre-rendered cinema or in-game engine cut scene, a fine compliment to the graphical improvements for sure.

The action took place in various huts and walkways around the village, which were suspended above some murky looking water. This meant most of the enemies were either bursting out of doors or coming from the water itself.

I noticed some unintentionally cute looking zombie frogs and some rabid piranha fish, the latter being incredibly hard to hit due to their small size and incredible speed.

The final showdown started off in a huge cabin at the end of the level, with a sexy lady called Manuela being held captive next to a weird egg looking thing.

No sooner had Leon shot the egg, however, that it jumped up and revealed itself to be the end of a tentacle attached to a huge monster. After several shots in the face, the monster swims down and out of the cabin, taking the action outside.

Your typical water-based monster battle ensues, trying to hit the boss whenever it pokes its body out the water or lunges out. It was quite challenging, and the tentacled-beast managed to kill me twice.

Other than graphical improvements and a new storyline, nothing much has changed here as far as I can tell. Reloading is done with a shake of the Wii Remote, pressing A picks up items, the D-pad changes weapons, the cursor is always on screen and can’t be changed (at least in this demo). The designers have said they have studied camcorder movements and tried to replicate that in the game, but I felt there was too much screen shake in this sequel. This could put some players off, as I know excessive and constant camera movement can be unsettling to some people. Of course, this could be easily avoided if Capcom included camera shake as an adjustable setting, like in the recent Dead Space: Extraction.

Darkside Chronicles is due for release on November 17th in North America.

What about the shaky cam, was it toned down any?  Just watching that preview trailer, I actually couldnt focus on the game much because of all that camera movement.    How is it in person?  is it too much?

It's right there in the article, Jim.

The designers have said they have studied camcorder movements and tried to replicate that in the game, but I felt there was too much screen shake in this sequel. This could put some players off, as I know excessive and constant camera movement can be unsettling to some people.

I too hope the shaky cam feature can be turned off. I don't get sick by it, but its very distracting.

Some claim it's cinematique.  It's not a big deal, it probably means the game won't be awfully-waffley dead slow like the last one. 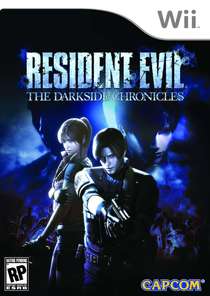