Though previously thought to be a tech demo at Nintendo's E3 2006 press conference, Wii Music was recently shown as a standalone title in a video on Nintendo's Japanese Wii website. The video showed the familiar orchestra that was playable at E3, and earlier a man is shown (with no footage) playing the drums with two Wii Remotes. Presumably both will be included in the game.

Music to your ears, or a cacophonous mess?...

A few additional details for the various play modes....

HANDS-ON: At E3, the only way to sound good in Nintendo's new rhythm game was to already know the music....

Jam to the preset song list with up to three other friends and over 60 instruments this holiday season....

EXTRA LIFE: Wii Music is known from the bitter reactions it got from gamers, but for Pedro, it is the cause of many a great memory....


BLOG: What Role Should the Games Media Play in Getting Games Made?

Sorry, the Box Hunter is out this week. Instead, a friendly tiger joins our circus!... 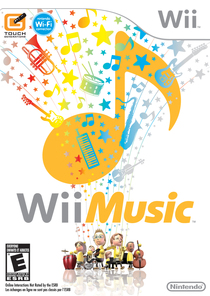