The Timelessness of Final Fantasy VI

16-bit graphics, a memorable cast, and an incredible story make this RPG one for the ages.

Any re-release of Final Fantasy VI marks a worthwhile occasion to play through this seminal role-playing game. From its 14 playable characters to its fiendishly-perfect antagonist, this SquareSoft masterpiece demonstrated how important it is to fill a game world with individuals you wanted to know on a personal level, or one you wanted to stop at all costs. More than that, though, Final Fantasy VI is a story about losing that battle for the fate of the world, and then picking up the pieces of a broken civilization and finding the courage to move forward. There’s something transformative about playing it, and I’m surely not the only person who experienced an epiphany after finishing it for the first time. Video games have always been about overcoming adversity and triumphing after failure; the adventure of Terra, Locke, and the others showed us that even if the world seemingly ends, there’s still something or someone worth fighting for.

After falling head over heels in love with Final Fantasy IV, I was consuming screenshots, news, and impressions of Final Fantasy VI with religious fervour. Of course, I either didn't realize or didn't care that there were three games in the series that hadn't come to North America, so to me I was playing Final Fantasy 1, 2, and 3 in that order as they were released and titled in the West. My eagerness to play FF6 was matched only by my disappointment in knowing that a close friend would be getting the game for his birthday in October, which would happen two weeks after the game's release. There was an envy that I had never experienced in my young life to that point. I feel something similar even to this day — I guess we would call it FOMO now — but it was never as powerful as when I knew that one of my best friends just down the block was enjoying the game of my dreams while I begged my parents to let me live at his house for the next month.

Square Enix (then Square or SquareSoft) was at the height of their creative power during the early to mid '90s, and they helped transform the Super Nintendo into a 16-bit RPG powerhouse. If you consider their output that was never localized into English, the impressive array of games becomes even more astounding. For those who grew up with an SNES, it was an incredible time to be a fan of RPGs, especially turn-based ones. Maybe it was because the Internet was less prominent, but I never really heard any of the Chrono Trigger vs Final Fantasy VI debates. We were just blessed to have two of the best games in the genre at a time when we had the freedom to play to our heart's content. 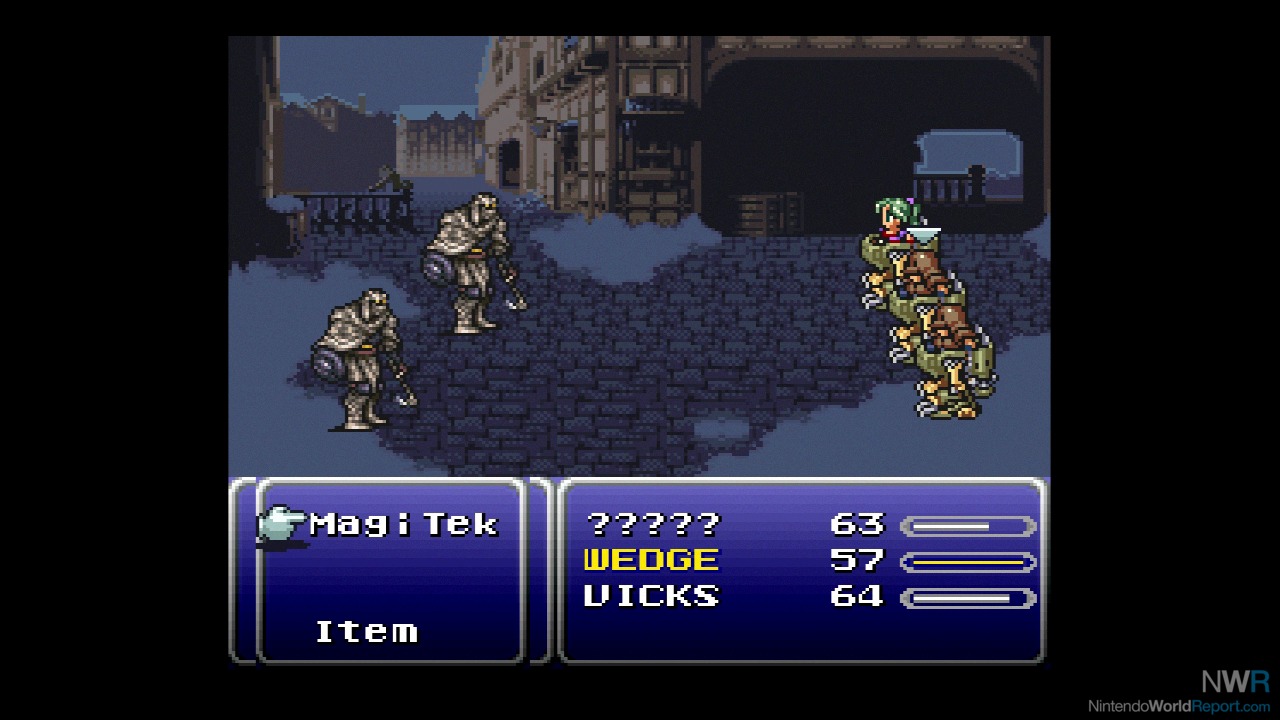 The sixth mainline Final Fantasy title perfected the formula to that point. Espers were a new and elegant method of teaching characters different magic spells and boosting particular stats at the same time. They allowed you to further customize your already diverse party. Sabin, a monk, could use a button sequence to suplex a train in one battle, and then cast back-to-back Meteor spells by the end of the game. Unlike Final Fantasy IV's very static characters and classes, VI opened up party building in a major way. Equippable relics allowed you to change action commands, have permanent spell perks like Haste or Regen, or even double the amount of experience a character earned. Ultimately, a player could really tailor their party to suit their preferences and downright break the game with the right preparation and a little grinding.

It's not often that the villain of a story succeeds in their evil plot, but Kefka is a memorable example of an antagonist who achieves his goal of ending the world. He literally destroys the aptly-named World of Balance, which is where the first half of the game takes place. It is Kefka and his pursuit of power that throws off this balance, leading to one of the greatest twists in video games, the party flying away from the Floating Continent as the world around them burns. You wake up in control of Celes, but what remains is a shadow of what came before. Enter the World of Ruin. The impact of this mid-game climax cannot be overstated. As the player, you fail to stop Kefka, and everyone pays the price for it. 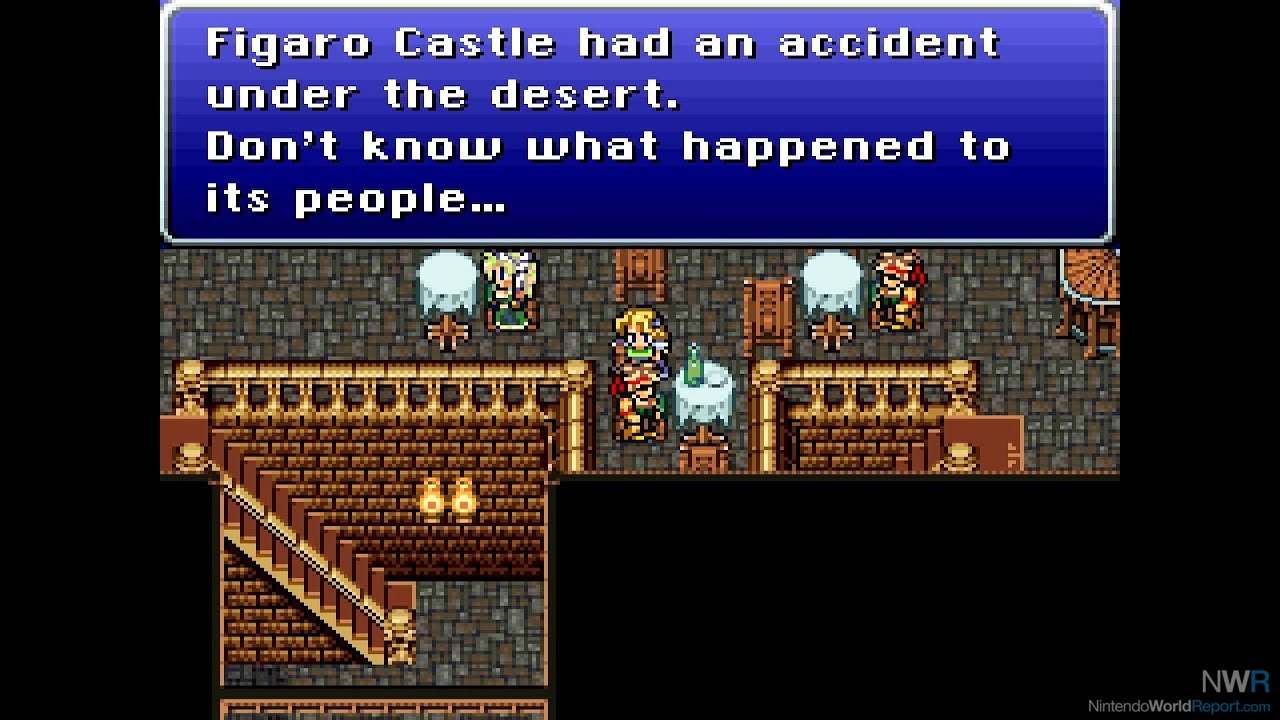 In both worlds, nearly every city has its own distinct personality. NPCs run the gamut from lying scoundrels and rambunctious children, to contemplative elders and hopeless lovers. In addition to its interesting people and places, Final Fantasy VI contains dozens of sidequests and secrets. Repeated playthroughs are sure to show you something you've never seen before: maybe a new way to defeat a boss, a new esper you've never used, or a new task presented by an unfamiliar face. But it's not just the small details that make the game memorable; it's the over-the-top setpieces that are impossible to forget.

One of these is the famous opera scene, where Celes plays the leading lady as a way of ensnaring Setzer, an infamous gambler intent on wooing the opera house's star Maria. Bumbling mini-boss Ultros attempts to foil your elaborate plan, and all the while the orchestra continues. Topping it all off is another Nobuo Uematsu masterpiece, Celes's theme, which opens with a dramatic build up to a sorrowful but dulcet lullaby-like chorus. From memorizing Maria's lines to racing against time high atop the stage, the opera house event has to rank among the best in all of gaming. 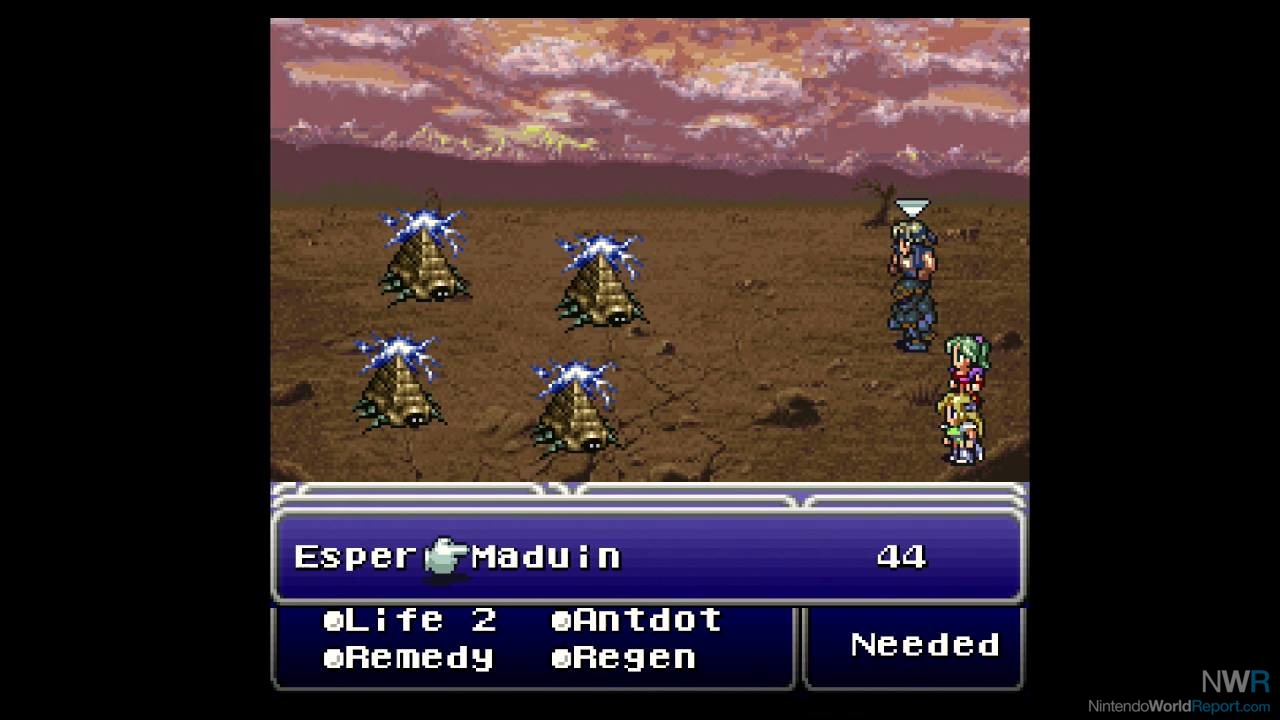 It's turning into something of a refrain with this timeless games series, but every playthrough of Final Fantasy VI, like Mega Man 2 and A Link to the Past before it, results in a welling up of both emotions and familiarity. There is a comfort to be found in a story whose major beats you remember concretely and whose more minute details you get to rediscover every time you come back. For me and my most recent playthrough of the Game Boy Advance version, it was finding Cyan in the World of Ruin and how he creates a life for himself impersonating a war widow's fallen beau. This re-discovery encapsulates what is so special about the game's second half and its less linear structure: you can get the band back together in a myriad of ways, so recruiting for the final confrontation with Kefka can be a unique experience each time you play. Of all the games in the series, if VI had been the last entry, it would be a perfect end to a franchise that has since been anything but final. Whatever the future holds, we'll always be able to join the Returners, strike back against an imposing empire, and enjoy that sweet Mode-7 chocobo riding.

Final Fantasy VI is also on GBA, having it handheld makes it more convenient to plythrough.

It's also available on the PSN store and can be played on a PSP, PS3, and PS Vita. The version is suboptimal because of load times but it's more affordable than the SNES/GBA versions and doesn't have hideous mobile art.

I was thinking of the SNES Classic version, but I most recently played the GBA version. Glad you're enjoying the series! I've got a lot more entries lined up and another one coming later this month!

Yeah if I could get my hands on a GBA version I would consider it but just going to hold on and hope that Square releases 1-6 on Switch. It just seems so weird not to.. you have the ones I wouldn't expect on switch 7,8,9,10,10-2,12 but not the obvious ones in at least 1,4,6. Hopefully ports of mana have convinced them to put the rest on the system..Looking forward to later this month for your next one!