The Timelessness of The Legend of Zelda: A Link to the Past

What makes the third Zelda game a perfect bridge between old and new?

In terms of titles, The Legend of Zelda: A Link to the Past is an all-timer. It alludes to time travel in a delicious pun on its plucky protagonist, but what’s even better than its supremely effective title is the game behind it. The Super Nintendo would be home to many quintessential entries, from Super Mario World to Super Metroid, but A Link to the Past didn’t need “Super” in its name to be much more superlative than that adjective could convey. Every 2D Zelda title that came before and has come since is compared to this 16-bit masterpiece, one that is every bit as entertaining now as it was in April of 1992, a mere eight months after the launch of the SNES. An almost 30-year-old entry in one of gaming’s most storied franchises, A Link to the Past might not be everyone’s first or favourite Zelda game, but without a doubt it remains a timeless classic.

The story of how I acquired this particular cartridge is an odd one, which I’ll share with brevity. As the weather began to warm up in the middle months of my westcoast Canadian home, the families in my neighbourhood would have garage sales every couple weekends. I guess you could say they were spring cleaning, but such a phrase wouldn’t have a ton of significance to seven-year-old me. What did interest me, however, was checking out each yard sale for electronics, video games in particular. As it so happened, just a few doors down from my house, a neighbour was selling what I believe were sealed copies of Super Ghouls ‘n Ghosts and The Legend of Zelda: A Link to the Past, in that unmistakable gold box. While I would be tempted by and eventually own both, it was the third Zelda title that I couldn’t help but gravitate towards after spending so many hours enjoying the first two games on my NES. I had also played Ghosts ‘N Goblins at some point prior to this, but its punishing difficulty may have also swayed me towards another trip to Hyrule. I’ll also give credit to Nintendo Power and assorted flyers tucked inside Super Nintendo game boxes for making me even more excited for A Link to the Past.

The opening is atmospheric and full of tension. As the rain beats down outside, Zelda speaks to you telepathically and spurs you to action. You follow your uncle towards the Hyrule Castle and gain entry through a shortcut hidden under a bush. Replaying the game just recently, these moments are still full of power and purpose, as if you and Link are driven forward through intuition and muscle memory rather than any type of deliberate choice. What struck me the most playing the game through again on the Nintendo Switch Online service was the way in which the setting of Hyrule, both in the Light World and the Dark World, is so evocative and captivating. Secrets, enemies, dungeons, and other characters fill both worlds to the brim; nearly every screen has an eventfulness to it. It’s so easy to be pulled away from your main objective, even if it's prominently displayed on the map, because walls invite you to bomb them; characters invite you to assist them; enemies challenge you to duel them. 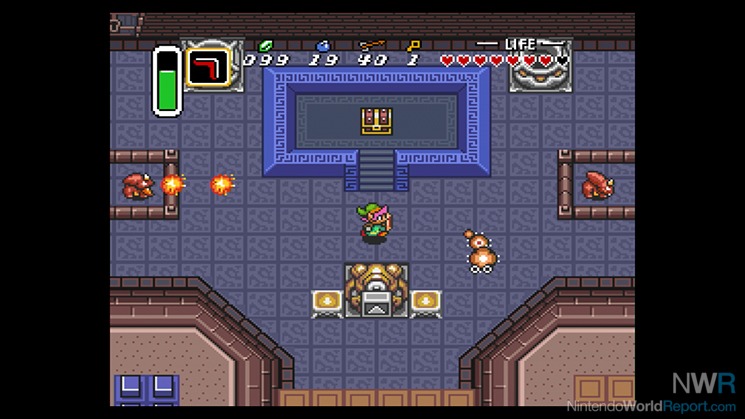 The true heart of A Link to the Past is its dungeons. Even if some of them pale in comparison to what would come after, their design, presentation, and challenge are still compelling today. Their frustrating elements are fleeting, and completing one continues to grant that genuine sense of accomplishment. The three Light World dungeons are simple and serve as a sort of tutorial for the rest of the game. Finding the bow and defeating the Armos Knights to win the Pendant of Courage isn’t a monumental task; it prepares you for the overall formula. After all, this is the first, and as it turns out, only Zelda game on Nintendo’s 16-bit home console, so there are bound to be at least as many new players as old. The Dark World dungeons feature interesting puzzles like transforming a false maiden into a boss by shining sunlight on it and using the power of special medallions to open up the final three dungeons. Literal darkness becomes a more prominent element, and even the most seasoned players can be tested if they don't collect enough heart containers or items.

Sidequests are plentiful, chief among them the pursuit of heart containers to extend your health meter. They function as a worthwhile reward for exploring and paying attention to your surroundings. I noticed the same type of environmental clues as we would see in Breath of the Wild: circles of flowers and collections of spikes in the ground often indicated a secret nearby. Characters you meet throughout the world offer scores of hints to help you on your main quest to stop Ganon, but they also push you towards hidden items. Even if said hints can be cryptic from time to time, they never approach the level of inscrutability we saw in the original Legend of Zelda. 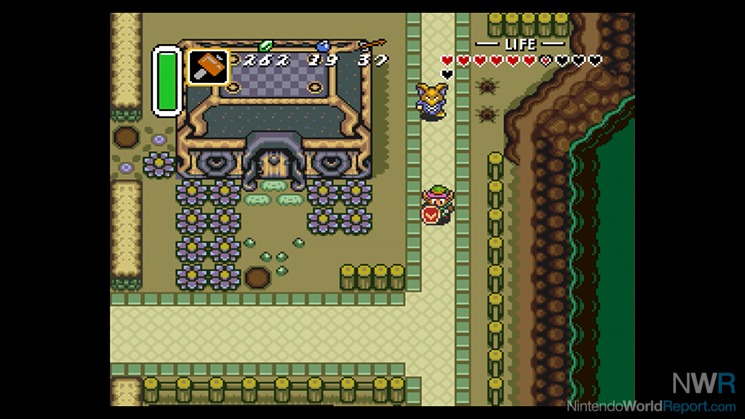 Replaying A Link to the Past was an exercise in retracing my steps. If at any point I was lost, the feeling never lasted long as memories of where to go and what to do came flooding back. I even encountered a few fun mishaps, like completing a dungeon without getting the Red Tunic or facing Ganon without the Silver Arrows. Thank goodness for the rewind function! Regardless, a gorgeous art style, incredible gameplay, and unforgettable world culminate in an action-adventure experience that stands the test of time. A Link to the Past is that and more; an indelible mark on Nintendo's storied history and a game that should be a permanent staple of your backlog. It is truly a Legend of Zelda.

Lately I've been watching Randomizer runs of ALTTP. Andy is a good runner. The game is really perfect for randomizers with exactly the right item density. Oh and it turns out you can defeat Ganon without silvers, if you hit him on a specific frame as he teleports away he takes regular damage (spin attacks hit for many frames so it's easy to hit the window, in swordless runs you have to use the hammer which does require frame perfect attacks...). Takes longer than using the silvers of course but in randos it's often still faster than looking for the silvers.

What Link to the Past gets right is almost everything. But the map is really the perfect size with The right amount of shortcuts. You rarely feel burdened. And those side quested mentioned feels more like just discoveries.

I first played A Link to the Past at some point in the N64 era but before Ocarina of Time had come out or possibly had even been announced yet.  Not owning an NES, LttP was my first Zelda and I knew to get hyped for "Zelda 64" so I must have played it before in 1996 or so.  My brothers and I played it as bit at a friend's house and thought it was cool how it resembled a real place with a village and such.  I had really only played linear level-by-level games at that point so this was something new to me.  I am sure it was after the N64 had come out because we managed to buy a used copy from my brother's friend who was unloading his "old" SNES games.  Maybe he had bought a Playstation or Saturn but clearly SNES was being considered outdated.

The coolest thing about our first play through is that the parallel worlds thing was a complete surprise.  We didn't have the manual and getting the three pennants and defeating Agahnim seemed like the typical length of a videogame to us since we hadn't played longer games like RPGs and such.  And by the time you get to that part you've covered the entire world map.  So we were very pleasantly surprised to find out we were not even half done!  Of course you do travel to the dark world to get the third pennant, being stuck as a bunny briefly.  I think we just thought it was a specific puzzle for that part of the game, not the first taste of the game's core mechanic.