Blending tower defense with puzzle platforming makes for a graceful and fun game with a slower pace.

While it might not be the first game to ever do so, Aegis Defenders blends action platforming with tower defense, but it does so with a wealth of grace and style. The two halves aren’t quite as strong separated, but combined, it makes for an endearing game with a gentle difficulty curve and a calming, serene style. 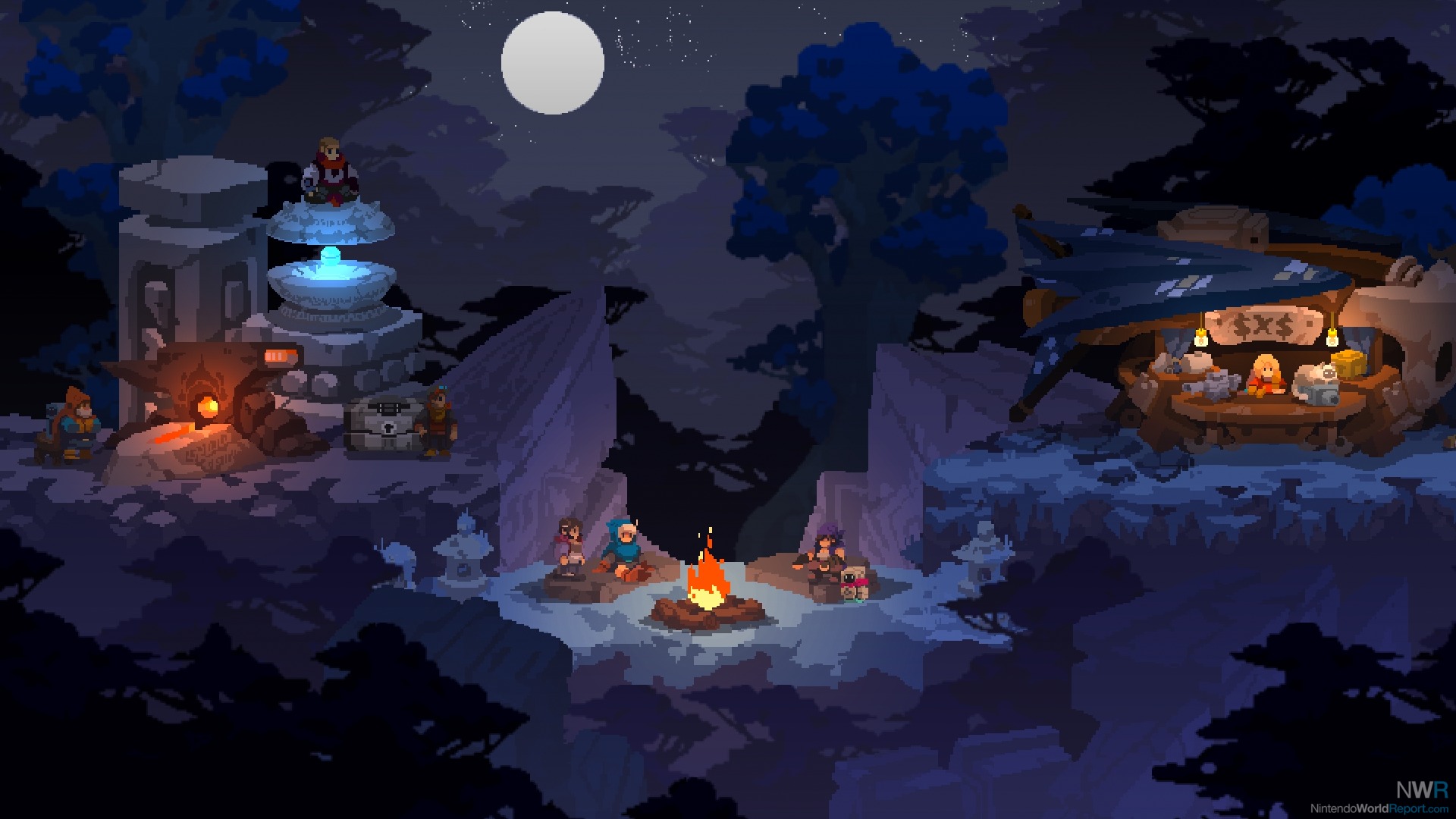 Aegis Defenders is split up into 18 different levels that are separated into two distinct phases: platforming and tower defense. The platforming involves a little bit of combat and a whole lot of Lost Vikings-esque multi-character puzzles. To start, only two characters are playable, easily switched between in single-player while also allowing for co-op play right off the bat. The puzzles are slow to ramp up, but when they start to kick into a higher gear, about halfway through when a third character is added, the clever design of these platforming segments are revealed. They’re rife with secrets, novel mechanics, and entertaining twists.

Each character has their own abilities, with starter character Clu wielding ranged weapons and the power to drop bombs and the other starter Bart able to build turrets and whack enemies with strong melee weapons. The pixelated characters are simple looking and color coordinated, making it easy to tell the powers apart as well as their colored affinity. The latter comes into play in combat, as each weapon and attack has a color associated with it. If it matches an enemy’s color, it’ll do more damage. All of these various pieces help make the platforming a whole lot of fun. Aside from the initial slow buildup, I’d play a game that just spent time with these puzzle platformer mechanics. 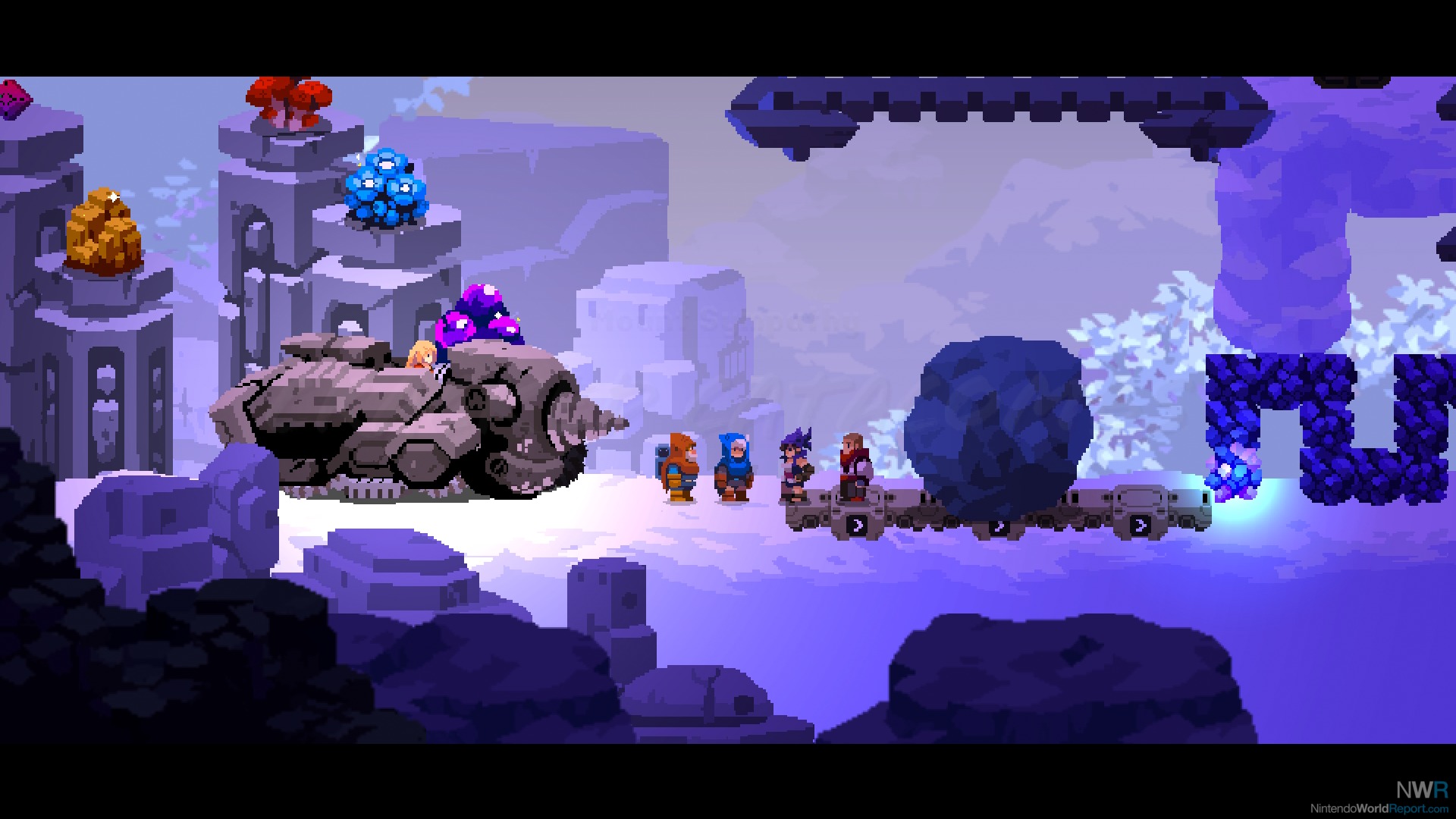 The tower defense doesn’t benefit as much from the slow ramp up in difficulty. Once I got a grasp on the basics of the tower defense segments, each round became rote and boring until things got more interesting about halfway through. The key differences that makes the gentle curve in the tower defense portions work worse than the platforming sections is that tower defense has a lot of downtime. Waiting for the enemies to run into your bombs and spikes so they die. Waiting for the enemies to be destroyed by your slew of turrets of all different elements and styles. When it finally gets more complex with the addition of more characters, the challenge increases, and as does the fun. It’s something I feel weird complaining about because it’s never an unpleasant experience. The game is gorgeous, the music is soothing, and the tone is whimsical and pleasing. The pace is just on the slower side for the first few hours.

But when Aegis Defenders kicks into gear, it ascends to very high places. The puzzles increase in complexity and ingenuity and the tower defense segments increase in depth and difficulty. A number of moments in the back half twist the structure in ways that deftly serve the story while also providing neat set pieces and moments. 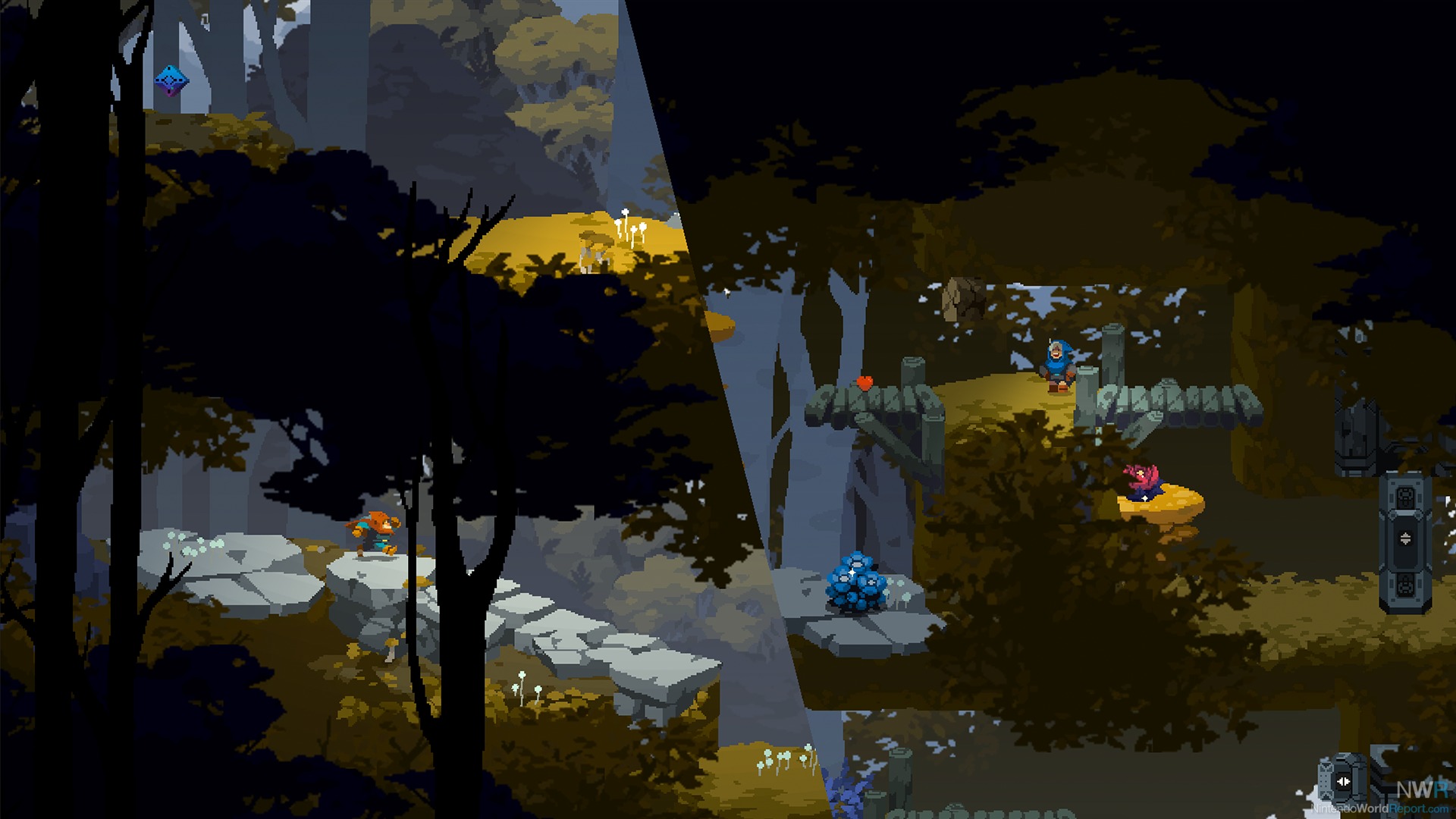 In between levels, your weapons and abilities can be upgraded in your exploring team’s caravan. A lot of the upgrades are standard stuff, like increased health and more powerful weapons. The various abilities can be combined in unique ways, allowing for a variety of strategy in the tower defense areas. For example, two of Bart’s resources can make a turret. Alternatively, combining one of Bart’s resources with another character’s makes for a turret with different firing capabilities and elemental properties. Early on, employing different strategies isn’t necessary, but when the going gets tough, having these different options and potential ideas is excellent.

Throughout the whole game is an ample helping of lore and story. Your party is, well, defending the aegis (get it?), and the background of the world is told through artfully crafted cutscenes before levels. I never found the backstory that compelling, though it never gets in the way. Aside from that expository dump, the characters are written with a lot of personality. The heroes are silly at times, but in a refreshing manner. While the big picture didn’t work for me, the smaller character beats were great.

All of Aegis Defenders can be played in co-op with another player. It is the type of cooperative experience that almost requires playing the whole game together with the other player because of the way it builds up. It’s one of the better split-screen experiences I’ve played, functioning similar to some Lego games where the screen is dynamically split depending where the characters are in relation to each other. I wasn’t able to play too much of the co-op, but it is nice to have another player around to work through puzzles with and control the characters separately. It was definitely welcome during some of the later tower defense parts. On Switch, I ran into a few minor technical hiccups that affected gameplay. A few levels were mired in slowdown, which resulted in accidental deaths. The HD Rumble during levels is cool, though, and naturally, the Switch is great for co-op.

Dripping with a fanciful charm, Aegis Defenders is a joyous blend of puzzle platforming and tower defense. While it starts slow, it’s an artful fusion of two somewhat disparate genres that comes together as a beautiful whole near the end, making it well worth a look in the crowded Switch eShop.