Greetings, Professor! There's... quite a lot to report.

In a big day for Fire Emblem: Three Houses, we have a date for the end of its expansion pass.

Following the reveal of Byleth for Smash Ultimate, Nintendo Netherlands released a trailer for "Cindered Shadows", the fourth part of the Three Houses Expansion Pass and quoted a release date of February 13. Nintendo of America followed with confirmation of the date being the 12th in North America.

And then we all crowdfund Sakurai's one year sabbatical.

Fighters Pass 1 may be complete, but now we have a second pass.

During the Smash presentation, the second fighter's pass for Super Smash Bros Ultimate was announced. It will contain six fighters, with the pass expected to be complete by December 31, 2021.

The pass will be available for purchase... Read more...

We know who put this stupid barrel here now: it was Banjo.

The Fighters Pass will wrap up with a righteous schooling.

Byleth has been announced as the final character in the first Super Smash Bros Ultimate Fighter's Pass. Originally from 2019 NWR Game of the Year Fire Emblem: Three Houses, Byleth will use multiple different types of weapons with the different directional buttons (lance, axe, and bow in addition to sword).

Not Tonight Enters On 31 January Switch

by Donald Theriault - 8:00 am PST
Discuss in talkback! Source: No More Robots

Yes, the date *is* intentional.

The post-Brexit adventure game Not Tonight will arrive on the most appropriate day.

No More Robots's dystopian adventure game Not Tonight will release on Switch on the 31st of January, as first reported on Nintendo's game list and confirmed by the developer. The US price will be $24.99, while the UK can grab it for £19.49 and the rest of Europe €22.49.

The next Raw Fury game is a bleak adventure, and it's a short time out.

The newest title from Krillbite Studio (Among the Sleep), Mosaic, will come out from Raw Fury on January 23. It can be preloaded now on the eShop for US$19.99 or equivalent.

Set in a dark world, Mosaic tells a tale of the drudgery of corporate culture and how a person's life can change after one event.

It could be anything. It could even be a boat!

The mystery of the sixth DLC fighter for Smash will be solved shortly.

by Donald Theriault - 5:00 am PST
Discuss in talkback! Source: Nintendo

No, "Sorry, James" is not something we say to Jones before making him review Oh Sir: The Hollywood Roast.

The first relatively busy week of the year for new releases sees a whole bunch of standouts fighting for attention, but the big release of the week (in sales, hopefully) is Tokyo Mirage Sessions #FE Encore for the Switch. (Note: any Boneghazi truthers in the comments will be shot.) The potential Game of the Decade candidate for the 2010s is bursting into the 2020s with hopefully, way more momentum and a fanbase that will actually buy RPGs.

Classic Nintendo Headquarters To Be Converted To A Hotel In 2021

Do you make the trip to see it now, or do you try to stay in the hotel when it opens?

A bit of Nintendo history will be renovated in 2021.

As first reported by the Japanese news agency Osumituki (translated by Japanese Nintendo), the building that served as Nintendo's corporate headquarters prior to the year 2000 and still had the company's logo on it will be renovated into a 20 room hotel. The renovation is expected to be completed in the summer of 2021.

Get some classic action going. 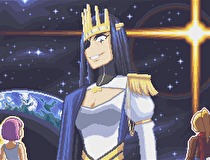 The Switch will be picking up a classically styled platformer this spring.

Infinite: Beyond the Mind is scheduled for a Q2 release according to the publisher Blowfish Studios. A stage-based pixel art platformer, the game will have 16 stages

Set in the kingdom of Beljantaur, Infinite starts... Read more...

Generally you don't want to stand on your burgers, but what do I know?

XSEED is offering a demo for one of their 2019 releases that allows for a lot of practice with multiple modes.

A demo for Burger Time Party is now on the Switch eShop. Four modes are included in the demo: the Solo Burger singleplayer mode, the co-op capable "Main Burger", the competitive "Battle Burger", and the arcade mode "Challenge Burger".

The indie darlings bring an anthology of adventures.

Devolver's newest publishing deal for Switch is an anthology of intrigue.

The indie specialists have reached an agreement with independent studio No Code to publish Stories: Untold for Switch next week. No price was announced for the game.

Stories: Untold is a collection of four short point and click adventure titles. Originally released on PC, the controls have been reworked for support of the Joy-Cons for the Switch release.

You might be surprised as to who's going to show up.

Arc System Works has announced a release soon for proof that game programming is harder than it looks.

Code Shifter is an 8-bit themed side-scrolling brawler set for release in the first quarter of 2020. The main character Stella is a programmer at the "Awesome Rainbow Corp" who has to debug a... Read more...

DOOM and DOOM II on Switch now run faster *and* can be expanded if you choose.

Updates for the July 26-released versions of the classic shooters are now available. The games now run at 60 frames per second, up from 35 at launch, and a quicksave/quickload function is now available by hitting R (to save) and L (to load in the pause menu). A quick weapon select has also been implemented.

We've got a cute-'em-up and ninjas (thousands of them).

The release schedule for the 23rd just got a load of old-school Sega.

Sega has announced that the Ages versions of Fantasy Zone and Shinobi will release outside of Japan on January 23. Both will retail for the standard Sega Ages prices: $7.99 US/€6.99/£5.99.

Who has two thumbs and bought Mario Kart 8 Deluxe and Crafted World full price two weeks ago? *This* guy.

Nintendo of America has kicked off a gigantic eShop sale for the new year.

Each update will increase the potential immigrant count to Galar.

Rather than third or fourth versions, Pokémon Sword and Shield will be receiving an expansion pass.

The pass will be available for purchase today for US$29.99 or equivalent, and will include special ingame outfits themed around Pikachu and Eevee when bought. The pass will release in two parts, one in June and the other in "Fall". The pass will need to be bought separately for owners of two games.

by Donald Theriault - 7:01 am PST
Discuss in talkback! Source: Nintendo

The doors will open on Pokémon Home next month.

During the Pokémon Direct, it was announced that the Pokémon Home service would launch in February: no specific date was given or cost indicated.

The service will allow for Pokémon to be stored in the cloud and transferred to Sword and Shield... Read more...

The secret darkest Pokémon game returns with a sort of new entry.

Pokemon Mystery Dungeon: Rescue Team DX is a remake of the original 2006 roguelike games by Chunsoft. Unlike the originals, which were two games split across the GBA and DS, both games will be on one cart for Switch.

Mystery Dungeon DX launches on March 6, and a demo will be available today that will allow save data to carry over to the launch game.

by Donald Theriault - 6:47 am PST
Discuss in talkback! Source: Chucklefish

You may want to find another general for this one.

Wargroove will be drafting new campaigns on February 6.

The military strategy game will add a new, co-op focused (both local and online) campaign, a quick play mode, new troops, a lobby system, and new map editing tools. There won't be any cost for the DLC.

The base game will also receive balance updates outlined on the game's dev blog.

by Donald Theriault - 6:00 am PST
Discuss in talkback! Source: Super.com

War continues to be other people.

The trailer shows some of the possible choices the alternate-history World War II presents, as well as some additional combat.

Broken Lines is currently slated to release before the end of March.